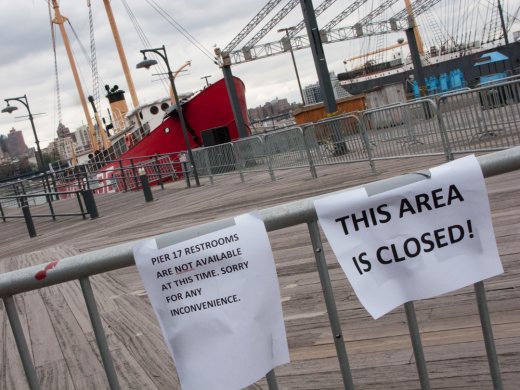 As downtown Manhattan assesses damage, more specifics are being reported, especially in low-lying Zone A. The Museum of the City of New York (MCNY), which is running the South Street Seaport Museum ,says that the storm surge waters soaked drawers of metal type in the Bowne and Co., Stationers.

Volunteers are reporting there on Wednesday, Thursday and Friday Nov 7 to 9, to hand dry and repack the antique type. The lobby of the museum had five feet of water which destroyed the front admission desk, computer and cash register, as well as the museum shop.

&#8220There was five feet of filthy, oil-laced surge in our lobby, wiping out the systems that run the escalator, the elevators, and the heating and air conditioning, it is not just the clean-up- it is the loss of revenue that we had been building so diligently,&#8221 says MCNY CEO Susan Henshaw Jones. The lack of power and the lack of paying visitors are a huge problem for the museum, and the cancellation of school programs make the revenue shortfalls even more severe. However, the preparations for weathering the storm made by the fleet Captain Jonathan Boulware and volunteers, helped the Ambrose and other ships anchored at the piers to ride out the surge pretty much intact, according to MCNY. (More about the Seaport Museum’s efforts).

There were reports of looting immediately after the high tides, by a security guard who saw people grabbing electronics in the Brookstone store, while the water was still waist deep. The windows of the store had been smashed by floating debris, as had many storefronts in the low-lying areas around Fulton St. and John St. at the edge of the East River. Policemen arrived to stand guard after sightings and call-ins about the light-fingered visitors, who were also seen picking clothes right off the Ann Taylor shelves.

Photo: Piers after the storm on November 2, 2012 (courtesy www.nynatives.com).