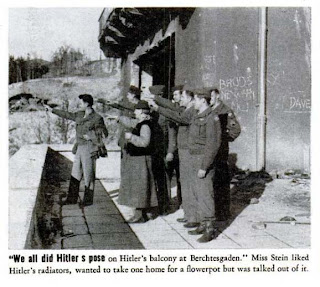 Controversy over Gertrude Stein continues to fester and boil, even after the great public acclaim for the Metropolitan Museum’s The Steins Collect show. Michael Kimmelman’s review in the New York Review of Books (“Missionaries,” New York Review of Books, April 26, 2012.  also his July 12 letter in response to criticism) revived old charges that Gertrude was a Nazi sympathizer. Kimmelman gave an overview of the exhibition, which focused on the early years of the Leo and Gertrude Stein in the ebullient art scene in Paris.

Kimmelman also discussed Barbara Will’s scandal mongering book on Stein, (Unlikely Collaboration: Gertrude Stein, Bernard Fay and the Vichy Dilemma, 2011) and repeated a perversely obtuse reading of a 1946 photo of the elderly author. The caption read that she would like to use Hitler’s radiator for a flowerpot, and the photo showed her with GIs posing in a Hitler salute on a balcony at the Fuehrer’s Berchtesgaden retreat in Austria.

Although the inability to read irony is a well-known national blind spot, to use it as the cornerstone of a critical argument in a NYRB review is bizarre indeed. Even more puzzling is such tone-deafness in an architectural critic who can read Rem Koolhaas Delirious New York and Frank Gehry buildings and easily interpret the forms.

Critical response from those who know something about Stein and her career, those who have actually read her work, and those who have seen the photograph in question ranged from surprised to outraged. The NYRB which usually relished catfights among the intellectuals, declined to publish the responses, so poet and writer Charles Bernstein has posted a dossier which offers a wealth of interesting evidence on Stein’s views of two wars which she experienced as an expatriate American in France. https://jacket2.org/feature/gertrude-steins-war-years-setting-record-straight

Alan Dershowitz in the Huffington Post also enthusiastically calls Stein a collaborator, on the basis of the Will book, with a seemingly partial and unironic “reading, without reading” of the author’s work and life. 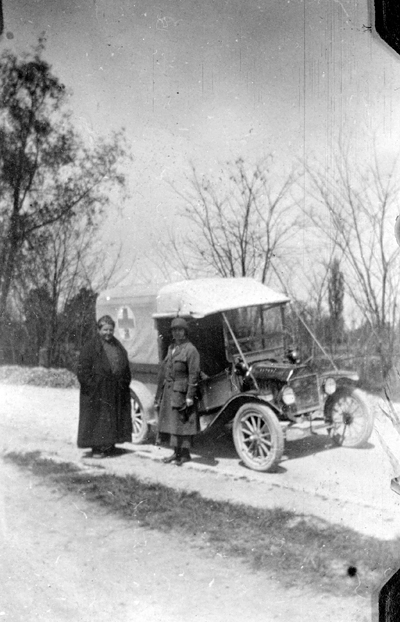 Charles Bernstein and others point out that Stein was lucky indeed to survive World War II in France, and that being protected by some friends such as Bernard Fay who had dubious sympathies and connections to Vichy does not mean that her views were the same. A copious record of Stein’s interactions with the GIs exists, which seems to contradict the condemnation by association implied by her critics. It remains fascinating to see how inflammatory the words of modernist experimental writers can still be, especially when used in short bites as proof of strange things that later commentators would like to attribute to the deceased.

The complicated and many-layered Jewish, lesbian, expatriate poet, writer and art collector Gertrude Stein was not always seen this way. During World War I, as she famously relates in a chapter of The Autobiography of Alice B Toklas, she delivered comforts and ferried wounded soldiers in her Ford named Auntie, after her favorite relative Aunt Pauline. Her opera with music by Virgil Thompson, Four Saints in Three Acts opened on Broadway in 1934.

Stein was hailed as both a celebrity volunteer hospital driver and a celebrity avant-garde writer when she toured the United States for the first time in 30 years in 1934. Her talks were popular, according to the New York Sun which wrote: “Miss Stein a Wow, Her Lectures a Sellout She’s Such a Hit.” This was just when the Autobiography of Alice B. Toklas was selling widely, perhaps as much for its stories about helping the American Fund for the French Wounded, founded by Anne Morgan, as for its avant-garde prose. Both in WWI and in World War II, Stein was very fond of soldiers, whom she called her “godsons.” She wrote them letters, told their stories and extolled their ordinary courage and service for their country. 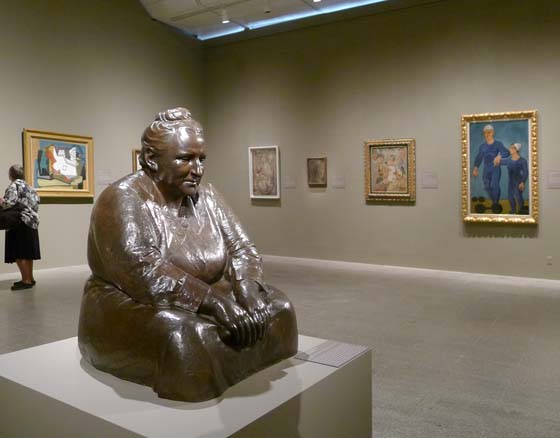 The Metropolitan exhibition The Steins Collect was a terrific example of an art show with historical mojo. From walking through the exhibition you could understand why adventurous souls like the Steins wanted to don sandals and drink wine for lunch across the table from the most creative people in the world – like Pablo Picasso and Henri Matisse. Meanwhile, back in New York, Lily Bart in Edith Wharton’s novel hesitated to even have tea with someone interesting lest it incite unwelcome gossip that would destroy her reputation. That’s why when WWI broke out Edith Wharton rapidly produced an edited volume in 1916 The Book of the Homeless with contributions from Jean Cocteau, Maurice Barres, Igor Stravinsky, Henry James and Joseph Conrad among others to tell American why they should stick up for these marvelous creative folks who gossiped more about scandalous art than about scandalous sex. Wharton was a war correspondent for Scribners’ Magazine during the war. 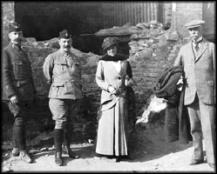 The Gertrude Stein Society held a conference recently at Yale where these weighty matters were thrashed out, notably in a keynote address by Joan Retallack of Bard College, and the publication of new editions of several Stein classics was celebrated. Fittingly one of the re-issues is Ida, a novel about celebrity. There is currently a related exhibition at the Beinecke Library, Yale, New Haven, running until December 14 curated by Nancy Kuhl and Ulla Dydo, and another called &#8220Seeing Gertrude Stein: Five Stories,&#8221 ran last year at the National Portrait Gallery.