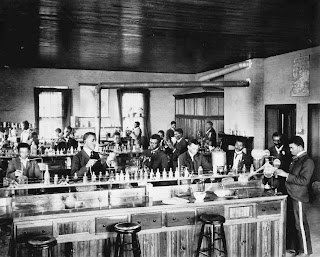 Dating from 1894 – near the time when George Washington Carver was preparing to move from the Midwest to Tuskegee &#8211 the Saranac Laboratory’s white glazed brick walls, wooden cabinetry and period-accurate hood cabinet are very much of the same historical style as those of Carver’s later labs at Tuskegee. Period photographs reinforce that similarity. To round out the illusion, the filmmakers will be outfitting a professional actor with period attire to represent Carver, and are also seeking several young college age men and women to appear as supporting actors representing Carver’s African American students at Tuskegee. Acting experience is not required for these non-speaking roles, and Signature Communications will supply appropriate wardrobe as well as $100 stipend and a credit in the film. Contact: John Allen, 410-535-3477, [email protected].