The enormous thirteen-foot tall explorer is steering the Santa Maria right over Central Park. Tatzu Nishi’s “Discovering Columbus” allows visitors to climb 75 feet up the column in Columbus Circle to see the famous statue up close. Nishi has surrounded it with a living room stage set, furnished with modern accoutrements from Bloomingdale’s, that gives a truly odd twist to the experience of seeing the pock-marked monument set atop a coffee table.

The Public Art Fund supported this project, which has been extended to Dec. 2 to allow people thwarted by Superstorm Sandy a longer chance to visit the city’s strangest public domestic space/monument. Free tickets are available online.

The history associated with the statue’s erection evokes interesting chapters in the saga of New York and the nation. As you climb the stairs, you can read an inscription on the side, telling you that Italians commissioned Gaetano Russo to sculpt the figure for the 1892 400th anniversary of Columbus’ voyage, and that the navigator’s contemporaries scoffed at his crazy ambition.

The text radiates pride in the Italian community, an assertion of ethnic identity in New York at a high tide of immigration, and a moment of considerable Anglo disdain for the newcomers who were trying to claim their place in the New World&gt-, by asserting “We got here first, anyway.”

Nishi underlines our awareness of this by placing an American Wing coffee-table book nearby, which offers a wry comment on manifestations of WASP pride stemming from the same period. The Bicentennial of 1876 and the Columbian Quadricentennial that sparked this monument also sparked a wave of interest in early American arts and crafts. This led to collecting, scholarship and the founding of the American Wing of the Metropolitan Museum, lovingly depicted in the art book on the coffee table at Columbus’ feet. Italian Pride and WASP ancestor worship co-exist in this installation by a Japanese artist who lives in Berlin. 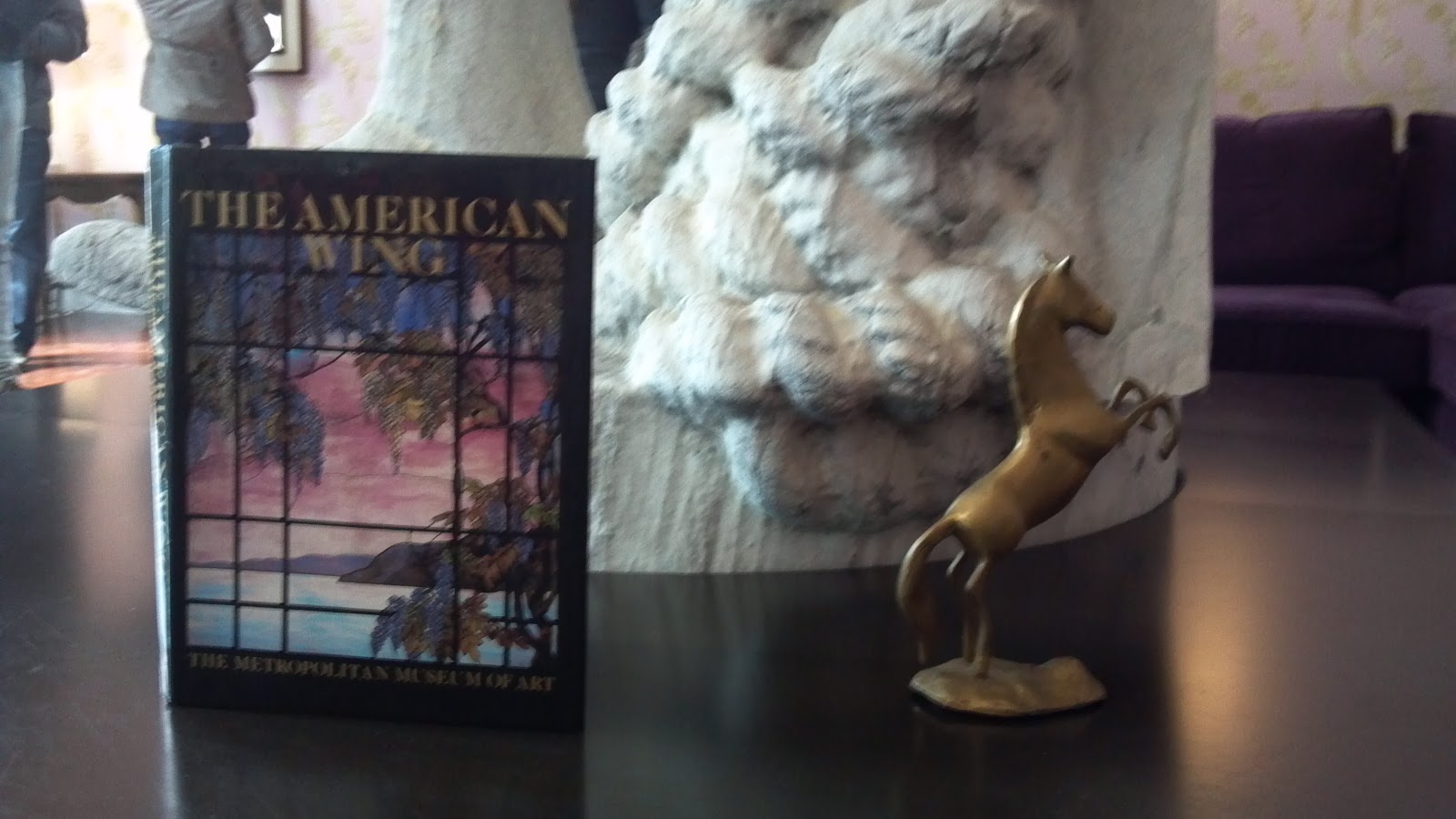 More recent and startling interior decorations suggest how tourists may have history, iconic sights and Americana on their personal agendas. The lavender wallpaper features figures of Marilyn Monroe, a Coney Island hot dog with zigzag mustard and the Empire State Building. A framed Andy Warhol print of a lurid kitty might be reminding us that Columbus’ fame has well outlasted Warhol’s famously predicted 15 minutes in the limelight, despite the obscurity of so many city statues and monuments. A framed Jackson Pollock could be taken as an artistic metaphor for the fearsome Atlantic waves that Columbus had to traverse – or does it suggest that Pollock, like Columbus, dared to sail in uncharted waters? 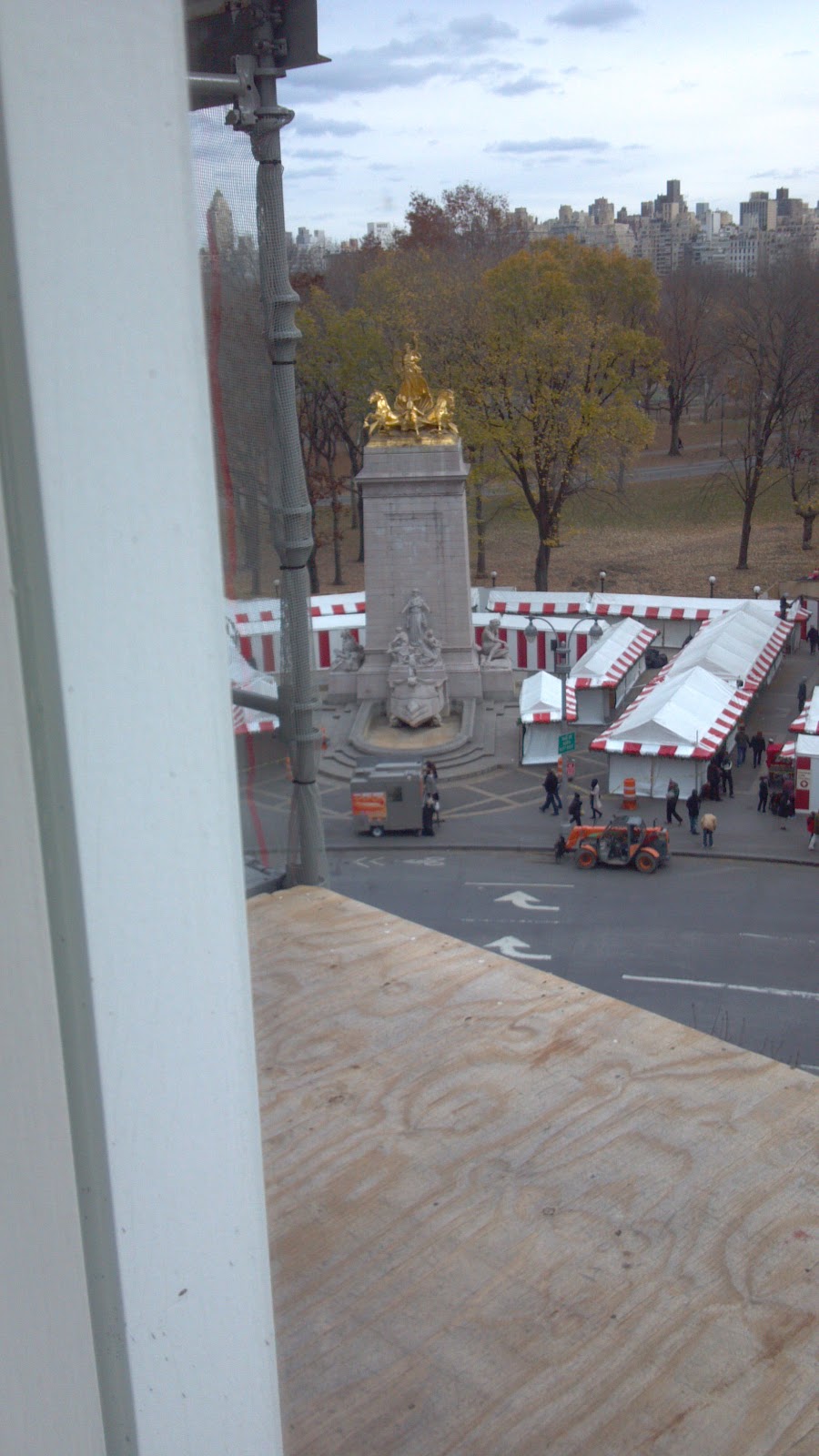 Perhaps the most scathing historical nugget lies in the way you experience the figure of Columbus from on high in relation to the southwest corner of Central Park. Only from on high on this platform does he seem to be taking his ship right over the monument to the Maine, a gilded memorial to a warship that exploded in Havana Harbor.

This misinterpreted incident was the pretext for the Spanish-American War, setting off a long and troubled pattern of relations between the US and the Caribbean, and following up what in the eyes of many Latinos is the troubled legacy of Columbus. To some he is less the great discoverer and more the agent of a new and devastating colonial order that brought disease, slavery and economic subjugation to the New World.

That Nishi’s curious art installation close-up experience brings us face-to-face with the weather damage done to the marble, which we cannot usually see from below, is itself a metaphor for the beating that Columbus’ reputation has taken in recent years. History close-up reveals textures that are not always the most pleasant face of the past. After the art work closes, city park crews will use the platform for restoration work on the Russo’s sculpture.