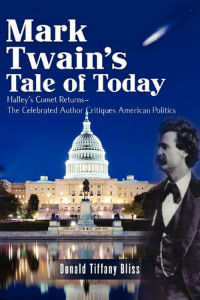 Over 100 years later, Twain’s insightful commentary retains an uncanny relevance to the challenges facing contemporary America. His views are as fresh and provocative as those of any contemporary cable TV &#8220talking head,&#8221 Sunday morning roundtable debater, political blogger, or radio talk show host.

Twain’s aphorisms are cited to support almost any proposition- which are often inconsistent and contradictory positions. With a handy maxim for most any occasion, he is fondly quoted by Tea Party and Occupy Wall Street activists, union leaders, and liberal and conservative commentators. After all, Samuel L. Clemens was not a political scientist or philosopher who expounded a concrete, coherent theory of governance. He was an equal opportunity satirist, ridiculing the dogmas, shibboleths, and platitudes that characterize the conventional wisdom, regardless of ideological bearings.

Ambassador Donald Tiffany Bliss takes an in-depth look at the intricacies of Mark Twain’s America in his new book, Mark Twain’s Tale of Today: Halley’s Comet Returns-The Celebrated Author Critiques American Politics (2012). The great-grandson and grandson of Twain publishers, Ambassador Bliss combines his lifelong interest in Mark Twain with over thirty years of experience in the Nation’s capitol-both serving in the federal government and as a partner of a major international law firm-to trace the evolution of Twain’s political and policy views and illustrate their continuing relevance to contemporary American politics and foreign policy.

As a cure for American democracy that had veered off course, Twain advocated pervasive education, an informed and engaged electorate, and the election of representatives who think and act independently, regardless of political affiliation. He claimed that &#8220if we would learn what the human race really is at bottom, we need only observe it in election times.&#8221 Mark Twain’s Tales of Today explores the timely issues of today’s election through Clemens’ writings, speeches, correspondence, unpublished dictations, and life experiences.

With passionate faith in the Republic’s potential, despite the corrupting nature of political power, Twain believed that satire and story-telling are among the most effective instruments of reform. This book endeavors to prove that these ideals may hold just as true in the present. Like Twain reportedly once said, &#8220History does not repeat itself- it rhymes.&#8221