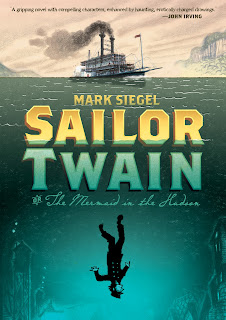 One hundred years ago. On the foggy Hudson River, a riverboat captain rescues an injured mermaid from the waters of the busiest port in the United States. A wildly popular&#8211and notoriously reclusive&#8211author makes a public debut. A French nobleman seeks a remedy for a curse. As three lives twine together and race to an unexpected collision, the mystery of the Mermaid of the Hudson deepens.

Sailor Twain, or The Mermaid in the Hudson by Mark Siegel is a new graphic novel of the webcomic of the same name serialized online in the tradition of a nineteenth century novel. A mysterious and beguiling love story with elements of Poe, Twain, Hemingway, and Greek mythology, drawn in moody black-and-white charcoal, Sailor Twain is a study in romance, atmosphere, and suspense set in 1887 on board the Hudson River steamboat Lorelei.
While serializing Sailor Twain online, Siegel became a minor internet sensation (see Gothamist, and Boing Boing), posting every Monday, Wednesday and Friday. Online readers who sent photos of themselves occasionally made cameo appearances in 1887 style. The beautifully published hardcover edition is currently generating a lot of press and raving reviews.  John Irving has called the book &#8220a gripping novel with compelling characters, enhanced by haunting, erotically charged drawings.&#8221 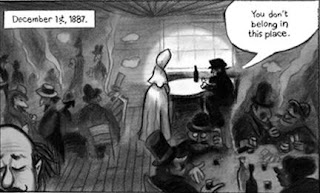 Siegel was born in Ann Arbor, Michigan but grew up in France, where at the age of five he made a postage-stamp-sized book called La femme legere. His elementary, junior and high school years were busy with making stories, cartoons, posters, a dozen stop-motion animated films, and plenty of comics. He returned to the States for college, attending Brown where he majored in creative writing and fine arts, and also wrote and directed several plays he now calls &#8220pretty bad.&#8221

After a ten year stretch of book projects he says were rejected by most prestigous publishing houses, Siegel got his first break in 2004 with editor Richard Jackson, in Lisa Wheeler’s, Seadogs, which won the Texas Bluebonnet Award. Long Night Moon, the first project to showcase a growing love affair with the Hudson Valley,

followed with author and editor Kevin Lewis, and a script by Cynthia Rylant. Soon afterwards To Dance (2006), written by Siena Cherson Siegel, won ALA’s Sibert Honor. In 2009, on another Lisa Wheeler script,Boogie Knights was released followed by Moving House, from Roaring Brook Press.