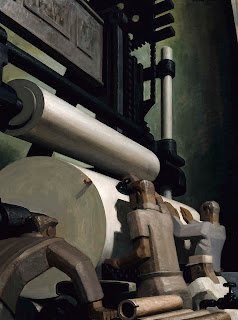 The Public Works of Art Project lasted only six months, from mid-December 1933 to June 1934. Its purpose was to alleviate the distress of professional unemployed American artists by paying them to capture &#8220the American Scene&#8221 in works of art that would embellish public buildings across the country. Artists painted regional, recognizable subjects — ranging from portraits, to cityscapes and images of city life, to landscapes and depictions of rural life — that reminded the public of quintessential American values such as hard work, community and optimism.

“This exhibition is very timely, opening in an election year when Americans are again grappling with questions about what course the nation should take as it struggles to recover from the worst economic downturn since the Great Depression,&#8221 said State Museum Director Mark Schaming. “We think  visitors will be inspired as they see this outstanding artwork that bears witness to this New Deal cultural program.”

The exhibition began a national tour in 2010 celebrating the 75th anniversary of the PWAP by drawing on the Smithsonian American Art Museum’s unparalleled collection of vibrant paintings created for the program. The 55 paintings in the exhibition are a lasting visual record of America at a specific moment in time.

Artists from across the United States who participated in the program were encouraged to depict “the American Scene,” but they were allowed to interpret this idea freely. They painted regional, recognizable subjects—ranging from portraits to cityscapes and images of city life to landscapes and depictions of rural life—that reminded the public of quintessential American values such as hard work, community and optimism. These artworks, which were displayed in schools, libraries, post offices, museums and government buildings, vividly capture the realities and ideals of Depression-era America.

The exhibition is arranged into eight sections: “American People,” “City Life,” “Labor,” “Industry,” “Leisure,” “The City,” “The Country” and “Nature.”

Ross Dickinson paints the confrontation between man and nature in his painting of southern California, “Valley Farms” (1934). He contrasts the verdant green, irrigated valley with the dry, reddish-brown hills, recalling the appeal of fertile California for many Midwestern farmers escaping the hopelessness of the Dust Bowl.

The program was open to artists who were denied other opportunities, such as African-Americans and Asian-Americans. African-American artists like Earle Richardson, who painted “Employment of Negroes in Agriculture” (1934), were welcomed, but only about 10 such artists were employed by the project. Richardson, who was a native New Yorker, chose to set his painting of quietly dignified workers in the South to make a broad statement about race. In the Seattle area, where Kenjiro Nomura lived, many Japanese-Americans made a living as farmers, but they were subject to laws that prevented foreigners from owning land and other prejudices. Nomura’s painting “The Farm” (1934) depicts a darker view of rural life with threatening clouds on the horizon.

During its brief existence the PWAP hired 3,749 artists who created 15,663 paintings, murals, sculptures, prints, drawings and craft objects at a cost of $1,312,000. In April 1934, the Corcoran Gallery of Art in Washington, D.C., exhibited more than 500 works created as part of the PWAP. Selected paintings from the Corcoran exhibition later traveled to the Museum of Modern Art in New York City and other cities across the country. President Roosevelt, First Lady Eleanor Roosevelt and government officials who attended the exhibition in Washington acclaimed the art enthusiastically. The Roosevelts selected 32 paintings for display at the White House, including Sheets’ “Tenement Flats” (1933-34) and Strong’s “Golden Gate Bridge” (1934).

The success of the PWAP paved the way for later New Deal art programs, including the Works Progress Administration’s Federal Art Project. Nearly 150 paintings from the PWAP were transferred to the Smithsonian American Art Museum during the 1960s, along with a large number of artworks from subsequent programs that extended into the 1940s, especially the well-known WPA program. A catalog, fully illustrated in color and co-published by the Smithsonian Art Museum and D Giles Ltd. in London, will be for sale in the Museum shop, in both the hard-cover and soft-cover version.

Open until Jan. 20, 2013 in West Gallery, 1934: A New Deal for Artists is organized and circulated by the Smithsonian American Art Museum with support from the William R. Kenan, Jr. Endowment Fund and the Smithsonian Council for American Art. The C.F. Foundation in Atlanta supports the Museum’s traveling exhibition program, Treasures to Go.

Established in 1836, the New York State Museum is a program of the State Education Department’s Office of Cultural Education. Located on Madison Avenue in Albany, the Museum is open Tuesday through Sunday from 9:30 a.m. to 5 p.m. except on Thanksgiving, Christmas and New Year’s Day. Admission is free. Further information can be obtained by calling (518) 474-5877 or visiting the
Museum website at www.nysm.nysed.gov.