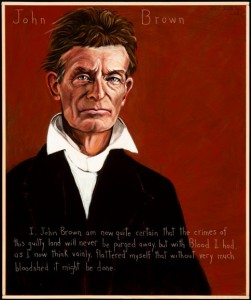 John Brown Lives! and North Country Community College have announced that Maine artist Robert Shetterly will be present for the unveiling of his portrait of abolitionist John Brown during Freedom Now, Freedom Then: The Long History of Emancipation, a two-day program designed for students, educators and the general public on November 30-December 1, 2012. The events will take place in Saranac Lake and Lake Placid, New York.

With this portrait, Brown joins Shetterly’s pantheon of more than 180 Truth Tellers that includes Abraham Lincoln, Sojourner Truth and Mark Twain from the nation’s past, and Bill McKibben, James Baldwin, Michelle Alexander, and Jonathan Kozol who are addressing some of humanity’s gravest concerns today.

Shetterly’s portraits have been exhibited across the country. His painting of Brown will be unveiled on Friday 30 November at North Country Community College, Saranac Lake campus, at the opening program of “Freedom Now, Freedom Then: The Long History of Emancipation”. Several other Shetterly paintings will also be exhibited at the college and at the other venues where events will be taking place.

Godine will talk about young men and women with North Country roots who have heeded the call for human freedman, including slain civil rights worker Andrew Goodman and criminal justice reformer Alice Green. A poster including Goodman, Green and four other civil rights champions done by Lake Placid artist Nip Rogers will also be on display.

Following in his forebear’s footsteps, Morris will talk with students about slavery in Douglass’ time and today, when more people are trafficked and held in slavery than at any other time in human history. Twenty-seven million people are enslaved in nearly every country on Earth, including the United States where State Department estimates that 15,000 women, men and children are trafficked each year. Morris will also discuss service-learning opportunities for students to join the 21st century abolitionist movement to end slavery once and for all.

A cornerstone of John Brown Lives!’ work is to provide teachers in and outside of the classroom with high-caliber opportunities to engage with historians, scholars, anti-slavery activists and artists in an intimate setting. Heaven Hill Farm in Lake Placid will be the venue for a full day of workshops, presentations and conversations on the complex history of emancipation for educators, librarians, and the general public and will feature: Dr. Gloria Marshall-Browne on freedom and the Founding Documents- Dr. Margaret Washington on women and emancipation- Civil War Memory blogger Kevin Levin on film and emancipation- Magpie, the folk duo, on emancipation in song- Artist Robert Shetterly on art to promote courageous citizenship- Kenneth Morris, President of the Frederick Douglass Family Foundation, on engaging youth, congregations and communities in emancipation today- and Dr. Franny Nudelman on emancipation our texts and textbooks.

David W. Blight, preeminent scholar on the U.S. Civil War, will give the closing keynote address, “The Historical Memory of the Civil War and Emancipation at 150” on Saturday night in Lake Placid (venue to be determined). Dr. Blight is the Director of the Center for Slavery, Resistance and Abolition at Yale University and the author of numerous award-winning books and publications including American Oracle: The Civil War in the Civil Rights Era– A Slave No More: Two Men Who Escaped to Freedom, Including Their Narratives of Emancipation- and Race and Reunion: The Civil War in American Memory.

For more information, presenter bios, and a complete schedule of workshops, film and music programs, visit John Brown Lives! on Facebook or contact either Martha Swan, Executive Director John Brown Lives!, or Cammy Sheridan, Assistant Professor of Social Sciences at North Country Community College. Swan may be reached at 518-962-4798 or info@johnbrownlives.org. Sheridan is available at 518-891-2915, ext. 1271 or csheridan@nccc.edu.