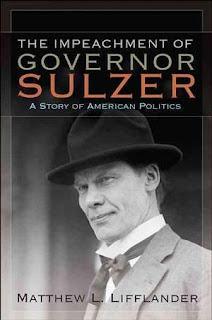 In The Impeachment of Governor Sulzer (SUNY Press, 2012), Matthew L. Lifflander brings to life the dramatic story of a forgotten incident in New York State political history. When William Sulzer was elected to the office of governor of New York State in November 1912, it represented the culmination of a long and successful career in politics.

The son of a German immigrant father and a Scotch-Irish American mother, Sulzer (1863–1941) rose through the powerful Tammany Hall machine to become the youngest man ever to serve as speaker of the New York State Assembly. In 1894, he was elected to Congress, where he served with distinction for eighteen years, rising to chairman of the House Committee on Foreign Affairs. When he became governor, it was with the support of the Tammany Hall machine, and everyone expected that he would duly perform his duties under the direction of Tammany boss Charles F. Murphy.

Political reform and the corrupt influence of political machines were significant issues of the day, however, and shortly after Sulzer’s election he began to project a populist “man of the people” image, announcing that he “belonged to no man.” After he rejected some of Murphy’s recommendations for key appointments and initiated investigations into corrupt state officials—many of them with Tammany connections—it was decided that he was a threat to the party bosses and had to be removed. Incredibly, less than a year after his election to the highest office in New York State, Sulzer had been impeached and removed.

In addition to shedding light on the career of one of the most interesting and colorful figures in American political history, The Impeachment of Governor Sulzer explores legal, moral, and political issues that continue to this day, including pervasive questions about money and politics.

A longtime political insider, Matthew L. Lifflander began his career in Albany as assistant counsel to Governor W. Averell Harriman, where he first became acquainted with the story of Governor William Sulzer. As special counsel to the speaker of the New York State Assembly, he drafted laws that enhanced state tourism as a vital economic development program, including the world-famous “I Love NY” campaign.

Lifflander was also instrumental in drafting the state’s campaign finance reform legislation, and has served as finance chairman of the New York State Democratic Party, headed New York State fundraising for Democratic presidential candidates, and managed presidential and gubernatorial campaigns in New York State. He is currently counsel for SNR Denton US, LLP, and resides in Hastings-on-Hudson, New York.

One thought on “New Book: The Impeachment of Governor Sulzer”