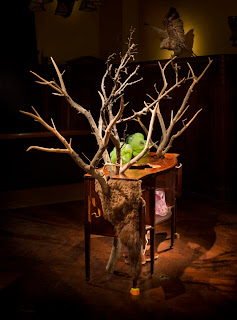 Architectural white elephants are a specialty of large urban areas, and armories form a particular subset of these: rife with possible new uses, dauntingly expensive to reclaim. In recent years New York City’s Park Avenue Armory Conservancy has refurbished its 1881 building and turned it into an exciting new space.

Artist in residence at the Armory in 2012 was Carol Hepper a sculpture who works with natural and artificial materials, combining found and made elements in startling juxtapositions. Her pieces installed during the Art, Antiques and Design show at the Armory in September provided a sharp and witty counter-narrative to the careful cultivation of fine finishes and exquisite inlays for sale in the fabulous displays in the cavernous drill hall of the armory.

Hepper had taken over the Field and Staff Room, famous as the watering hole of the officers of the elite Seventh Regiment who used the Armory as the home base from the Civil War to the late 20th Century. Designed by Pottier and Stymus and in the 1890s, it adopted a Renaissance Revival style and hosted bibulous gatherings that were a key bonding ritual of the silk stocking regiment that included Vanderbilts, Rensselaers, Livingstons and Harrimans. Such officers as Teddy Roosevelt and Elliot Roosevelt his brother, and father of Eleanor have raised a glass under the gaze of two giant mounted deer heads who still preside high on the wall. 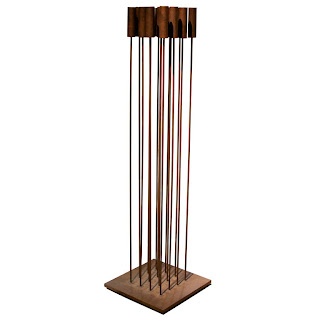 Hepper has channeled the influences and expressed them in new forms in the pieces on display. The centerpiece, called Armory Armoire is crafted from a discarded piece of cabinetry with six legs, a sideboard on its way to the dumpster when Hepper intervened. She has turned it into a different kind of trophy: a couple hooves gambol at the ends of tapered legs, and apple branches grow through its counter top into abstracted racks of antlers over a ruff of bison hair. Various cutout interventions expose cabinet interiors where lush colors glass globes sprout in rounded mushroom forms. The cabinet top has a scalloped cut out where it appears that one glass form dropped through from above.

The long former sideboard commands the room on a diagonal, as if it were a ghost of a Northern Pacific train reborn as the buffalo and antelope it annihilated in the nineteenth century. These illusions might well have been floating not too deep in the artist’s unconscious since she grew up on a South Dakota ranch where an abandoned transcontinental railroad line ran through and bison today calve in the drifts and meadows.

The bison lives on in the transformed furniture of the Armory. Indeed, this cabinet which is not quite fully fauna might canter away from the clank of regimental swords and the clink of colonel’s cocktails in the Field and Staff quarters across the way. There in the Veteran’s room its glowing orbs would feel at home warming in front of a blue-tiled fire under Tiffany windows. The spacious Veterans Room features elaborate eclectic decor by the Tiffany Firm, with interiors designed by Candace Wheeler incorporating Moorish, Greek and Celt elements. Here the colored glass and twisting vines resonate with some of the motifs in Hepper’s sculpture. Like the Tiffany Company, she feels comfortable wedding nature to technology, dripping foam on tree trunks, using both tanned salmon skins and plastic fins and planting natural elements in manmade frameworks. 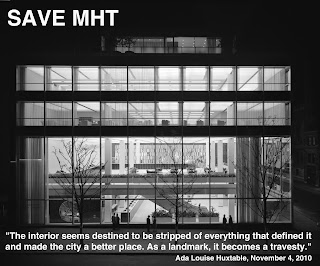 Next door at the Art, Antiques and Design Fair, the most entertaining juxtapositions were found at the Lost City Arts booth. There you could rattle the tines of a fabulous Harry Bertoia sculpture, Sonambient, available for a mere $120,000, or admire the burnished wooden surface of a George Nakashima side table, cut from a large gnarly walnut tree.

With its mix of modern, moderne, furniture, lighting, design and sculpture, the boutique firm located in Cooper Square represents an urban sensibility that brandishes its period affections without affectation. A set of aluminum robots (anonymous) marching off a sideboard in the booth display seemed ready to crackle the techno-fusion credo in 1950s synthesized speech. Recycle, reclaim, refurbish, bring nature into your crib but also let every alloy have its day.

Harry Bertoia best known work got back into its original building this year in an interesting preservation fight. The 70- foot long copper and nickel golden arbor screen originally featured in the startlingly open lobby of the Manufacturer’s Trust bank building at 510 Fifth Avenue on the corner of 43rd St. The glass-walled modernist building designed by Gordon Bunshaft of Skidmore, Owings, Merrill in 1954 is landmarked outside and in, praised for its see-through structure that let banking be “transparent” with a giant visible vault as icon and the Bertoia screen marking a divide between public and staff spaces. With many changes in ownership, it was finally converted to retail use and JP Morgan Chase removed the screen, which was not part of the land marking. Preservationists led a lawsuit to restore the famous Bertoia piece, and this spring it was reinstalled behind the chirpy bright colors of Joe Fresh goods for sale.

One thought on “Art and Preservation at the Park Avenue Armory”