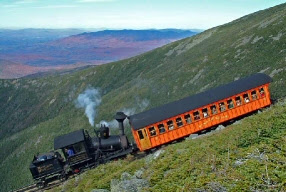 In 1935, after years of planning, debate, and construction, the Whiteface Mountain Veterans Memorial Highway was completed. It was named in honor of America’s veterans of the so-called “Great War” (World War I), and was expected to be a major tourist attraction. Automobiles were becoming commonplace in the North Country at that time, and travelers to the region now had a thrilling view available to them at the press of a gas pedal.

Seventy-five years later, it remains a spectacular drive and a great family excursion. But the macadam highway to the summit almost never came to be, and New Hampshire’s Mount Washington nearly had a New York counterpart.

Since the mid-1800s, men had planned various strategies to access the top of Whiteface Mountain. There were footpaths, horse trails, and designs drawn for a carriage road. But on a much more ambitious scale, railroad access was once planned to the summit. Had it been completed, it’s possible the present highway would never have been built.

The idea for a rail line to the top of Whiteface surfaced regularly in the early 1890s, when the famed hostelries of Lake Placid catered to a growing clientele. Attractions were needed to ensure that visitors would return, and an easy view from atop Whiteface would be a great amenity for the growing tourism industry.

The idea gained momentum in 1892 when a group of New York City financiers, led by Mirror Lake Hotel manager Charles Martin, purchased the summit of Whiteface. Martin’s plan included a carriage road to the top, and facilities providing for overnight stays. The carriage road, he said, would follow “French’s old route,” a reference to Samuel and Russell French, who operated a hotel at the village of “French’s,” later known as Forestdale, northwest of Whiteface.

In the following year, Albert Putnam, a member of the same syndicate, confirmed those plans, adding that a railroad would be built to the summit from the Lake Placid side. The goal was to match the success of Mount Washington’s cog railway, the only such line east of the Rockies. Construction was set for spring 1894, but an economic depression (the Panic of 1893) ended the ambitious, expensive venture.

The Panic was a terrible time, rated by many economists as second in severity only to the 1930s. While the Great Depression was linked to bank failures, the financial problems in the 1890s stemmed from massive railroad failures (which toppled many banks as well). It was not a great time to be looking for funding to create a tourism-related rail line.

In 1898, upper management of the Delaware & Hudson Company prepared a cost estimate for running a cog railway up the Lake Placid side of the mountain, a much steeper grade than the motor road that exists today. The plans called for a small hotel at the summit- terminal depots at the mountain’s base and at Lake Placid village five and a half miles away- and two steamers on the lake for carrying passengers from the village dock to the mountain-base terminal.

A cog railway is the only safe train option for steep ascents and descents. The motor drives a cog gear, and the gear’s teeth catch in a toothed rail that lies between the two outer rails, controlling the train’s movement and preventing wheel slippage on steep inclines. The total cost for the special line was estimated at $100,000 ($2.7 million in 2012). The scheme never got beyond the planning stage, however, and was subsequently abandoned.

In 1901, the resurgent economy brought renewed interest in the project, but with revisions. Instead of focusing solely on visitors already in the Wilmington area, the new idea was to develop a regional transportation system beginning on the shores of Lake Champlain. A trolley was planned from Port Kent to Lake Placid, with a second line leading to the top of Whiteface.

Leases were secured on the mountain, providing a circuitous four-mile route to the summit for the cog-wheel road. The cost was again estimated at $100,000. But problems arise with any project, and this one was no different. Not all of the mountain’s owners were enthusiastic about a rail line to Lake Champlain, instead favoring local connections between Lake Placid village and the mountain’s summit.

Those who conceived the original project saw steamboat and rail traffic along Lake Champlain as the keys to success, providing easy access for tourists. Successfully establishing leases for linking to the lake might convince the mountain owners to climb aboard for the entire project.

But the proposed trolley line ran into unforeseen difficulties. Electricity was needed to operate it, and planners were unable to secure waterpower rights through the Ausable Valley. After several efforts, that part of the plan was scrapped.

The mountain’s owners still envisioned a rail line up Whiteface, but the plan that was halted by financial conditions in the 1890s now fell victim to time and technology. Though the railroad idea was frequently revisited, the growing popularity of automobiles suggested an alternative plan better aligned with the future. Through the 1920s, the rail concept gradually morphed into a paved-highway initiative, culminating in the memorial highway to the summit.