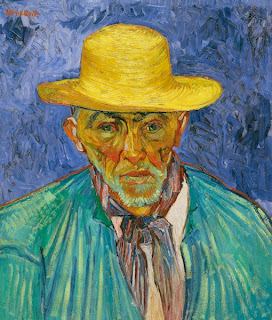 In conjunction with this presentation, the painting has undergone a comprehensive technical analysis at the J. Paul Getty Museum in Los Angeles. The modern masterpiece will be shown in the Frick’s Oval Room from October 30, 2012, through January 20, 2013. It will be accompanied by lectures, a seminar, and gallery talks. In the nearby Multimedia Room, a brief video presentation will discuss the results of new research and the painting’s examination, while an introductory video will be shown in the Music Room.

The special loan is part of an ongoing exchange program with the Norton Simon Museum that began in 2009 when a group of five works from the sixteenth and seventeenth centuries traveled to New York. Other loans have followed: the Frick’s Comtesse d’Haussonville by Jean-Auguste-Dominique Ingres was shown at the Norton Simon in the fall of 2009, and Hans Memling’s Portrait of a Man was on view there this past winter and spring.

The van Gogh presentation in New York is being coordinated by Frick Senior Curator Susan Grace Galassi, who said, &#8220Our exchange program with the prestigious Norton Simon Museum has offered both institutions opportunities to see their works in different contexts. For the most part, we have featured artists not represented in our own holdings, as is the case with the selection of this remarkable van Gogh portrait. In this instance, the timing feels particularly fortunate, as we’ve spent the last year focusing on artists-Renoir and Picasso-active in the late nineteenth and early twentieth centuries and their relation to earlier artists in our collection.&#8221

Support for the exhibition is generously provided by Agnes Gund.