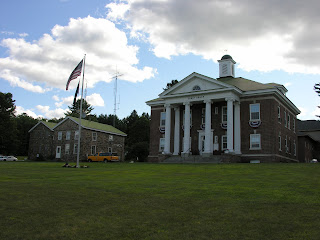 Miller took to the courts, claiming that misspellings of Murkowski’s name on many ballots disqualified those votes. The ridiculous charge—it’s an election, not a spelling contest—was dismissed. Otherwise, candidates with easy-to-spell names (like Miller, as opposed to Murkowski) would enjoy a considerable write-in advantage.

A precedent for that situation had long been established, but it wasn’t always followed. More than a century ago, an Adirondack election was decided based on the electorate’s inability to spell a candidate’s name and to record it with consistency. The result? Across the state, headlines of potential bloodshed made the news. It was a year before the issue was finally resolved.

It all began prior to the election of fall 1901 in Hamilton County, where the Republicans chose B. Frank Kathan as their candidate for sheriff. The Democrats offered no opposition, yet Kathan lost the election. Say what? Yep, it’s true. He lost, even with no opponent on the ballot.

Leading up to November, a few dedicated Democrats, including some deputy sheriffs (led by William Osborne), felt the party should have offered a candidate. They began urging voters to support a certain write-in candidate, the very popular Jim Locke.

By all accounts, it came as a total shock on Election Day when the ballots were examined and Jim Locke had triumphed by 40 votes (326–286). He was declared the winner and was issued a Certificate of Election, verifying the outcome.

When Locke took over the office of sheriff, Kathan took off for court. Despite opposition, he obtained a show-cause order requiring the Board of Canvassers to recount the votes (Kathan’s claim was that some ballots were “defective”). The judge ordered that the votes be counted exactly as they were cast, and that presented a problem for James Nathan “Jim” Locke.

Though the voters’ intentions were clear, Locke’s name had been written in many forms. In some settlements he was known as Jim, and in others as Nat. On the ballots, there appeared Jim, James, James N., James Nathan, J. N., Nat, and other variations. The recount revealed new totals: Nat Locke–223- J. N. Locke–32- James N. Locke–24- and a number of other smaller groupings.

Since Frank Kathan had garnered 286 votes, he was declared the winner and was issued a Certificate of Election. Hamilton County now had a new sheriff. Well … let me rephrase that. Hamilton County now had two sheriffs. Jim Locke had already taken up residency in the county jail at Lake Pleasant, and he wasn’t going anywhere. Suddenly, the county had a big problem, and the entire state was waiting to see how it would play out.

It wasn’t pretty. Locke soon made his position clear—he expected to remain sheriff. To that end, headlines from Albany to Buffalo proclaimed that the Hamilton County Jail was under siege, and that violence might well play a role in the outcome. As one article noted, “Kathan demanded possession of the keys to the jail, but Locke had three guards on duty, armed to the teeth with revolvers and Winchesters. Kathan’s demands were refused.”

Adding drama to the situation, it was noted that Arietta sharpshooter Jim Higgins was among those defending the jail. A set of Albany headlines in mid-February said it all: “Crack Shot Guards Jail at Lake Pleasant—Supreme Court Defied—May be Necessary to Call Out Troops to Oust Locke.”

With the state militia already mentioned, Kathan turned again to the courts. A few days later, Locke was ordered to show cause why he should not be punished for contempt of court.

Next week: 2nd of two parts: High drama and a jailhouse coup at Lake Pleasant.