H. Judson Kilpatrick, a Union general during the Civil War, has been described as flamboyant, rash, and tempestuous. There’s no doubt that he was often a rogue officer, sometimes to disastrous effect. The South developed a deep hatred of him for the extreme methods he employed, but he was certainly part of the team effort that led to the North’s victory.

As every leader knew during the war, many levels of support were necessary in order to win. Despite being brash and confident in his abilities, Kilpatrick famously cited a North Country man, Captain John Viall, as critical to the general’s own success, and the Union’s as well.

John Greeley Viall, son of William and Mary Viall, was born in November 1829 in Westport, New York, on the western shore of Lake Champlain. In January 1852, when he was 22 years old, John left New York and settled in Texas. Nine months later, he purchased the San Antonio Tin, Copper, and Sheet Iron Ware Manufactory, which sold and/or fabricated stoves, cookware, water pipes, and just about anything made of metal.

Texas was still wild territory, having attained statehood just seven years earlier. Viall maintained contacts in Westport, and in a letter home in 1854, he described San Antonio as in “a state of intense excitement.” Several families had been killed by Indians, while others were scalped and left for dead in disputes along the state’s border. Viall had chosen a tough place to make a living.

In 1858, six years after he purchased the metal manufactory, the business failed. Viall returned to the North Country, where he became involved in politics. That same year, he was among the delegates to the convention in Springfield, Illinois, where Abraham Lincoln was nominated to succeed Stephen Douglass in the US Senate.

On September 17, 1861, several months after the outbreak of hostilities between North and South, Viall enlisted at Crown Point. For three years following induction, he served as a private, second lieutenant, first lieutenant, and captain of Company H, Fifth New York Cavalry.

From that point (July 1864) forward, John served as captain and assistant quartermaster of volunteers until his honorable discharge in November 1865. Those final 16 months of service prompted General Kilpatrick to offer high praise for Quartermaster Viall, a man burdened with tremendous responsibility.

That may sound like an exaggerated assessment of any position, but consider the Review’s description of what the job entailed during the Civil War.

“The quartermaster’s department is charged with the duty of providing the means of transportation by land and water for all the troops and all the material of war. It furnishes the horses for artillery and cavalry- supplies tents, garrison equippage, forage, lumber, and all materials for camps- builds barracks, hospitals, wagons, and ambulances- provides harness, except for artillery horses- builds or charters ships and steamers, docks and wharves- constructs or repairs roads, bridges, and railroads- clothes the army- and is charged generally with the payment of all expenses attending military operations which are not expressly assigned by law or regulation to some other department.

“… wagonmasters, agents, teamsters, scouts, and spies, all … come under the supervision and pay of the quartermaster. He must … anticipate every want of the army.

“The quartermaster … builds the warehouses at every post- repairs, refits, and furnishes all houses and offices for army use- provides all hardware and building material (nails, glass, rope, etc.) and all the machinery used- fits up hospitals for the sick- and furnishes coffins for the dead. 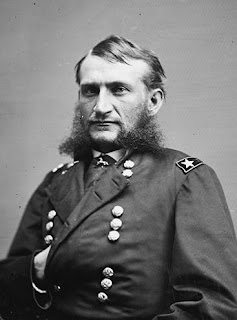 For General H. Judson Kilpatrick, one of the roughest, gruffest, most controversial men in the Union army, Viall provided those services better than any of the hundreds of men who undertook them for the Union cause. The general bestowed lasting glory on him with the oft-quoted pronouncement: “John Viall is the best quartermaster in the Army of the Potomac.”

Quartermaster General Montgomery Meigs, the top man in the department, urged Viall to remain in the army at war’s end (ill health forced him to leave the service). Meigs himself was cited as indispensable to the Union cause by Secretary of State Seward. Clearly, Meigs’ assessment of Viall’s value was the highest of commendations.

Though working as quartermaster was the hallmark of his career, Viall did much more on the Union’s behalf, complementing a family history of stellar military service. His grandfather had fought in the Revolutionary War, “from Bunker Hill to Yorktown,” and his father had served in the War of 1812.

Impressive, for sure, but Viall’s own field experience took a back seat to none. He fought in the battles of Fredericksburg, Second Bull Run, Gettysburg, Appomattox Court House, Richmond, and dozens of others.

Throughout the remainder of his life, Viall consistently supported the military, though he struggled for reciprocation from the government. His health had suffered badly from the war, and when the military pension program was instituted in 1890, Viall began receiving $12 per month (equal to $300 in 2012).

A request for increased benefits due to stomach, kidney, and liver problems was rejected in 1892 (he was 63 at the time). Another rejection followed in 1900, even though a board of surgeons found him “totally disabled by reason of indigestion, enlarged prostate, and age.”

Finally, in 1907, the House of Representatives looked at Viall’s entire record from the Civil War. His great service was noted, leading up to a physical breakdown “from exposure and hardships in the West Virginia campaign.” Upon recovery, he had been “promoted to division quartermaster, and at the close of the war was acting quartermaster for the cavalry corps.” In retrospect, it was recognized that his efforts for the Union cause had been truly heroic.

A physician’s affidavit informed lawmakers of Viall’s current condition: “… the beneficiary is totally unable to perform any kind of manual or clerical labor due to general physical and mental debility, imperfect heart action, and senile decay.

“Other proof filed shows that the officer, owing to unfortunate financial ruin, has now nothing to live upon except the small pension of $12 per month, which is totally inadequate to maintain him. In consideration of the officer’s meritorious services for the period of four years, his great age, total inability to labor, and destitution, an increase of his pension to $24 per month is believed to be warranted.”

Six years later, on September 1, 1913, John Greeley Viall—Westport nat
ive, loyal soldier, and among the best supply men to support the Union troops—died in Washington at the age of 85. He was buried in Arlington National Cemetery with full military honors.

Photos:  Captain’s medal of John Greeley Viall- Major General H. Judson Kilpatrick.Lawrence Gooley has authored 11 books and dozens of articles on the North Country’s past. He and his partner, Jill McKee, founded Bloated Toe Enterprises in 2004. Expanding their services in 2008, they have produced 24 titles to date, and are now offering web design. For information on book publishing, visit Bloated Toe Publishing.