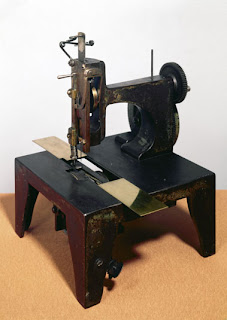 Material culture stormed the British airwaves several seasons back when the BBC broadcast &#8220A History of the World in 100 Objects.&#8221 Accompanied by a popular website which actually allows listeners to see images of the objects selected from the world class collections of the British Museum, the series fed an untapped appetite for history in small bites. Neil MacGregor, director of the British Museum observed &#8220Telling history through things is what museums are for.&#8221

Then WNYC radio’s Leonard Lopate ran a &#8220Story of New York in 100 Objects&#8221 and asked listeners to vote for the top ten. Among them were the Brooklyn Bridge and an oyster, both of which violated the The Leonard Lopate show rules which specified it be something that fit in a museum. Oysters are at least small enough, but don’t smell that great long term.

A Singer Sewing machine made the New York Times list when it joined the game with a &#8220History of New York in 50 Objects&#8221 on Sunday September 2 &#8212- the sewing machine evokes both industrial prowess and patent wars, if you dig into its history. But under the allure of curious objects, there’s another intriguing tale about how shifting the categories changes the story: Turns out that the game of history through objects can be played with different rule books that give you very different stories.  On the British end, the BBC and the British Museum thought they ought to cover the world- New Yorkers find it sufficient to cover themselves. 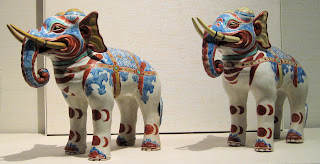 The New York Times 50 item story comes from history enthusiast and Times editor Sam Roberts who culled from items solicited from certified authorities at The New York Public Library, the American Museum of Natural History and the New-York Historical Society among other sources. The list is on-going and open to expansion at www.nytimes.com/50objects.

Roberts calls this a &#8220people’s history&#8221 and his objects have less of antiquity, and precious objects such as the Susana crystal from Germany or the Kakiemon Elephants from Japan, which are story vehicles for the BBC.

Featured on the NY Times list are Munsee arrowhead, wooden water pipes, a patent for the Otis elevator brake,a check to financier Jim Fisk from corrupt politician Boss Tweed, Leonard Bernstein’s conducting baton, and an early AIDS &#8220Silence-Death&#8221 button. What’s fascinating in looking at these three story-telling projects is to see how categories of material culture morph and bend to different narrative imperatives.

In the British version, which originated as a collaboration between the BBC Radio 4 and the 250-year old British Museum, connoisseurship is still highly valued, and the collections organized chronologically structure the story. Although each object can, &#8212- and probably for listeners and viewers often does &#8212- stand on its own, the project offers a carefully thought-out story of civilization. It’s plan and ambitions echo the public knowledge culture associated with Britain’s Open University, although it has a modern multi-media form.

The BBC series is audio and web-based, with a modern evolving version via social media that has comments and expanded numbers of objects. Startling items show up, for example, a credit card, or &#8220The Throne of Weapons&#8221 made of welded machine-guns turned in as part of a peace effort at the close of a long civil war in Mozambique. The story line is revisionist, including much on Eastern and Asian lands, interpreting the world through a less ethnocentric lens than might have been the case when the mighty British empire launched its collecting expeditions that filled England museums with world treasures.

But you can feel that entry striving to be a three-for: the object that gets you Dutch content, environmental history of the harbor, and maybe steers audiences to restaurants or the Oyster Bar in Grand Central. Indeed, since these are imaginative, or imaginary lists, the items don’t have to be in museum collections and be specific, collectible things at all, thus allowing the lists to avoid the headaches curators of actual objects face. Food, and a food cart, conjuring up wonderful ranges of smells and (to museum gate-keepers, forbidden zones of insect and mold-attracting substances), cheerily appear on newspaper and radio lists including the bagel-and-lox, and the artichoke which was banned at one point as a Mafia/Black Hand Italian form of market extortion when green grocers were largely immigrant Italians.

Did not make Lopate’s Top 10

The story lines for the newspaper object roundup do follow some print conventions such as serving a love of oldest, biggest, last, first and most kind of metrics. The alternation between print comfort food dailiness: the Anthora Greek paper take-out coffee cup and the subway token or metro card, and the high point/shock history highlight: World Trade Center dust, baby shoes from a drowning victim of the steamboat General Slocum disaster follow a narrative style that is entertaining but not very explanatory.  However, to see a three-page spread that offers a couple centuries of history in a highly popular package is itself so unusual as to make you once again take your hat off (that would be a Yankees baseball cap on backwards, please) to the power of objects.