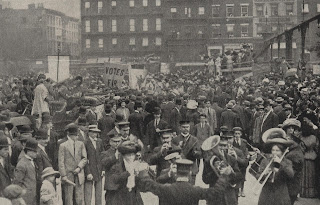 However, Sloan supported votes for women and rights for workers, and drew illustrations for such left wing publications as The Call.

Sloan wrote in May 21, 1910 &#8220Dolly donned her best-looking clothes and went to join the Socialist women and the Suffrage Party Ladies in a parade and protest meeting at Union Square. I started out soon after but missed the parade&#8230-Each of the Socialist women wore a red sash and they carried the much-feared Red Banner of the Party. The color of the Suffrage Party, as they call themselves, is yellow&#8230- I got in a little hot worded row with a man who was ridiculing the women, no bloodshed.&#8221 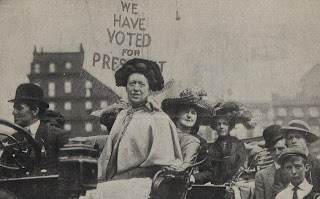 Dolly Sloan took these matters seriously and was very active in the Children’s Strike Committee during the Lawrence, Massachusetts textile mill strikes of 1912. To help the Bread and Roses strikers, supporters, many from the Industrial Workers of the World party, took in the workers’ children, to free striking families to picket and to help with feeding the young ones. Dolly and John took in two children.

The Sloans read widely in the press of the day and noticed how biased the coverage of labor demonstrations tended to be. In one diary entry, Sloan waxes satirical about a so-called &#8220anarchist riot&#8221 on May Day in 1912.

&#8220The World and I suppose all the rest of the capitalist papers have exaggerated the size of a &#8220riot&#8221 the incidents which Dolly told me occurred at the Union Square meeting yesterday. Some few, about five silly Italian Anarchists, protested again the American flag on the platform, and it brought about a wordy dispute. Finally the flag was removed. This all happened within thirty feet or so of me and I never knew it. Think of being with a &#8216-rioting mass of Anarchists tearing down the &#8216-American Emblem’ &#8216- and not knowing it!!&#8221  (May 2, 1912)