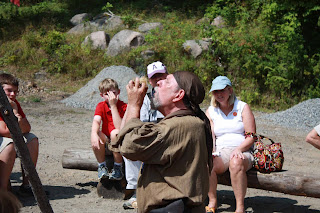 The fur trade comes to life at the Adirondack Museum this weekend, Friday, August 17 and Saturday, August 18. Join the museum and educational interpreters in period dress as they showcase a variety of survival skills at the annual American Mountain Men Encampment.

Visitors will see colorful demonstrations of tomahawk and knife throwing, campfire cooking, firearms and shooting, and fire starting. There will be displays of pelts and furs, clothing of eastern and western mountain styles, period firearms and much more.
Mountain men are powerful symbols of America’s wild frontier. Legends about the mountain man continue to fascinate because many of the tales are true: the life of the mountain man was rough, and despite an amazing ability to survive in the wilderness, it brought him face to face with death on a regular basis.

All of the American Mountain Men activities and demonstrations are included in the price of Adirondack Museum admission. There is no charge for museum members. The Adirondack Museum is open 7 days a week, from 10 a.m. &#8211 5 p.m., through October 14. The museum will close at 3 p.m. September 7 for special event preparations.