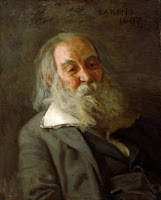 The Hyde Collection in Glens Falls (Warren County) is offering visitors an unprecedented opportunity to see the remarkable Portrait of Walt Whitman (1887-1888) by Thomas Eakins (1844-1914).

The Whitman portrait is considered one of Eakins’s finest paintings, and only rarely leaves Philadelphia, where it is a featured work in the collection of the Pennsylvania Academy of Fine Arts (PAFA). The image of one of America’s most influential poets, by one of the nation’s greatest artists, will be in Glens Falls for six months, as a second exchange for the year-long loan of The Hyde Collection’s Portrait of Henry Ossawa Tanner (ca. 1897) by Eakins.

Tanner was one of Thomas Eakins’s students at the Pennsylvania Academy and the portrait has been lent to PAFA for their exhibition Henry Ossawa Tanner: Modern Spirit. That major retrospective celebrates Tanner’s position in American art as a pioneering African-American, as well as establishing him as one of our most significant expatriate artists of the late nineteenth and early twentieth centuries.

The Portrait of Walt Whitman will be exhibited in Hyde House where visitors can also see In the Studio (1884), another work by Eakins in the Museum’s collection.