Suspicious circumstances had developed surrounding the disappearance of respected New York City businessman John C. Austin in July 1891. Two insurance companies who held life policies on Austin were deeply interested in his possible whereabouts. Neither had bought the story that Austin had drowned near Coney Island, leaving three small children fatherless. They believed a boat had picked him up and that Austin was now living and hiding out in the Adirondacks.Colonel Edward C. James, a nationally renowned, colorful attorney represented the insurance companies. His opening statement was a classic. After building to a crescendo, James presented his climactic claim: “Gentlemen of the jury, I will show you John C. Austin as he is today, alive and well.” With that, he unwrapped a heretofore mysterious package, revealing a nearly seven-foot-tall cut-out likeness of Austin, taken from a hunting photograph.

The courtroom was stunned, and for the entire trial, the jury and a packed house of spectators were constantly confronted with a powerfully connected message. Facing them from a corner was the huge likeness of the missing man in hunting regalia, while in the courtroom sat a grand selection of Adirondack woodsmen dressed similarly to Austin, awaiting their turn to testify.The plaintiffs appeared to have a tough case to prove, but their attorneys approached the trial from an angle that would elicit much sympathy. Pointing to Austin’s three young children, strategically placed in front of the jury box, they presented their opening line: “The only question you are called upon to decide is whether the father of these three little children was drowned on July 4, 1891.” The intent was obvious, but no less effective.Colonel James enjoyed some remarkable moments, shocking the court with the revelation that Austin, widely believed to be very well off financially, was in fact virtually bankrupt. He owed over $2500 (about $62,000 today) on various bills. Since his disappearance, Austin’s home had been sold for substantially less than its mortgage value. Days before vanishing, he had withdrawn $150 from the business (equal to $3,700 today). And on July 3, he had cashed a $400 check (equal to $10,000), even though his account to cover it held only a $2 balance.The $400 check (he vanished on July 4- it was written on July 3 but postdated for July 7) had been cashed by his brother-in-law (Carruthers), who was stiffed for the full amount. Colonel James pointed out that Austin, a supposed pillar of society, apparently wasn’t so averse to fraud after all, having knowingly committed it against his own relative. It was powerful stuff.The keystone of James’ case in support of those suspicious elements was what the media described as the “mountain flavor” of the courtroom. The effect was enhanced by the fact that many of New York’s “well-to-do,” including a number of top attorneys, frequented the Adirondacks as a favored getaway. Their interest in the Austin case was further piqued by the opportunity to see and listen to “their” guides speaking in court. Thus, the serious legal battle contained a sideshow element.When the time came for the Adirondack guides to testify, the defense suffered a serious setback. James Ramsay of Lowville said he had known Austin for many years, and had delivered him to Crystal Lake in Lewis County just a month after Austin’s disappearance from Manhattan Beach.However, Ramsay recounted conversations they shared regarding Austin’s recently deceased wife and the status of his children. During intense cross-examination, the details he had provided were shredded due to inconsistencies. The plaintiffs’ attorney suggested that Ramsay’s statements bordered on perjury, delivering a strong blow to the defense case.Other guides, however, acquitted themselves quite well before a thoroughly pleased audience, some of whom recognized the mountain men by sight. Certain testimony, like that of Charles Bartlett, helped undo the damage from a day earlier. Much was made in the media of the visitors from the mountains and their service in court (their rough appearance was also noted). Colonel James, himself a North Country native (from Ogdensburg), was appreciative of their efforts.Bartlett was followed by a parade of fellow guides who insisted they knew Austin and had spent time with him. He was said to have stayed for a while at Eagle’s Nest on Blue Mountain Lake. Some described his behavior at the Algonquin Hotel on Lower Saranac Lake, where he displayed outstanding skill on the billiard table. Austin was, in fact, known in New York City as an excellent pool player—one witness had played against him a day or so before he vanished. 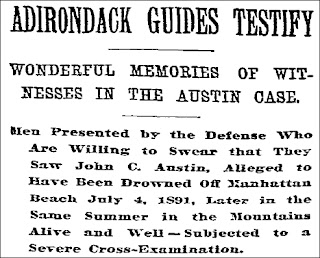 Among those who took the stand were Eugene Allen, Edwin Hayes, Robert King, Walter Martin, and Ransom Manning, all described as guides in the Saranac Lake area. Others included Hiram Benham, James Butler, Thomas Haley, Charles Hall, and James Quirk, offering convincing proof that Austin had perpetrated a fraud and was moving about in the mountains, avoiding detection.The men described encounters with Austin at several well-known establishments: the Ampersand Hotel, Hatch’s, the Prospect House, Miller’s Hotel, and Bart Moody’s. Many of the sightings were by multiple witnesses. One of the biggest problems for the company case was the outright honesty of the guides, who frequently used “I don’t remember” when asked about details from the events of the past few years. They were being truthful, but hearing that statement repeatedly from witnesses helped suggest the likelihood of faulty memories.When testimony ended, Colonel James offered a fine summation, supporting the statements from many people who had seen Austin since his supposed drowning. Trull, the lead attorney for the Austin family, enamored himself with the crowd, making light of the guides’ claims chiefly by attacking Ramsay, who had made conflicting statements. By targeting the guide with the weakest testimony, Trull hoped to dismiss them as a group. He smiled at the weak memories of some, and dismissed as untruthful those who recalled the past with remarkable clarity.He also ridiculed the idea that a man in hiding could wear “ … leggins’, slouch hat, corduroy trousers, duck coat … what a likely yarn! Dressed in this conspicuous manner … and he wanted to hide!” Trull’s voice fairly dripped with smiling sarcasm.The analogy was actually warped (though he would certainly stand out in New York City, no man who dressed like that in the mountains would be conspicuous), but the erroneous concept was lost on the jurors—city men who routinely dressed in suits.In the end, the jury was out only 23 minutes, returning to declare Austin dead. There were several moments of complete silence following the announcement, as if everyone were stunned.Then, punctuating the victory, Trull revealed the major role that sympathy had played in the case. Turning to the jurors, he said, “Gentlemen of the jury, on behalf of my clients, the three little orphan boys left alone and helpless by John C. Austin, I thank you.”Excused by the judge, the jury filed out, stopping only to offer Trull an unusual comment that was in keeping with the prevailing air of sympathy: “We want to contribute our fees as jurymen to the unemployed poor, and want you to arrange the matter with the clerk for us.” The companies later dropped a plan to appeal, instead deciding to cut their losses and pay the settlement. Thus ended the court case over the insurance claims. But as far as the companies were concerned, that’s all that was settled. They remained convinced that Austin had successfully duped everyone and was alive, well, and soon to be much better off financially.When the Austin family received the death benefit checks, they were at the same time relieved and angry—relieved to collect the amount in full, but angry with the section of the check that said, “Pay to the executors of the estate of John C. Austin, deceased.” The insurance company had drawn a line through the word “deceased,” emphasizing their belief that he was still alive.Though Austin had been pronounced dead, his story wasn’t. Reports came in of more sightings, and two agencies asked for a bounty in exchange for bringing him to New York. Barely a month after the trial ended, headlines reported that Austin was under surveillance by a detective in Toronto. Subsequent articles addressed the issues of his status. Having been pronounced dead, was he now safe? Could a country extradite someone who had been declared dead? Could the other country accept extradition of a deceased person?The questions were put to Colonel James, who commented on the jury’s decision: “They did not seem to appreciate the evidence that was presented, and with one fell swoop, they killed Austin and rendered his children orphans. It was sheer murder, but they thought they were right. You may have thought I was jesting when I said that the jury killed Austin. It is not that. “Actually, Austin is not dead, as this revelation proves. There is no reason to doubt the truth of the report. He is judicially dead in this country. As long as he stays in Canada, he is alive, all right. As soon as he crosses the border into this country, he drops dead—theoretically.”That’s the last anyone heard of John C. Austin.Photos: Top?Manhattan Beach Bath House on right. Bottom: Headline from the Austin case.
The story of John Austin is one of 51 original North Country history pieces appearing in Adirondack & North Country Gold: 50+ New & True Stories You’re Sure to Love (352 pp.), a recent release by author Lawrence Gooley, owner of Bloated Toe Publishing.