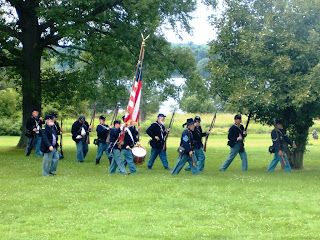 The 11th annual Civil War Reenactment Weekend at Robert Moses State Park in Massena will be held this Saturday and Sunday, July 28-29. The Reenactment Weekend is part of the St. Lawrence County Historical Association’s (SLCHA) Commemoration of the 150th anniversary of the Civil War, which began in 1861.Union and Confederate reenactors will stage mock battles, perform military drills, talk about camp life, and demonstrate such skills as coffin-making, cooking, cannon firing, and medical practices. There will be a fashion show of Civil War-era clothing, a basket auction, historical displays and period music. Reenactors from New York, Vermont, Pennsylvania, Ohio, Ontario and Quebec, Canada, are expected to attend, including, President Lincoln, several generals, and sutlers (vendors of period goods and clothing).The military camps are open to the public from 10 a.m. to 7 p.m. on Saturday, and 10 am to 2 pm on Sunday. Mock battles will be at 3 p.m. Saturday and 1 p.m. Sunday. Closing ceremonies will follow the Sunday battle. The Marine Corps League, St. Lawrence County Detachment 408 provides a food concession both days.

The St. Lawrence County Historical Association presents the weekend, which is hosted by the 2nd Michigan, Co. E Reenactment Unit. Admission is $4 per person per day, free for children 6 and under, maximum charge of $15 per vehicle. For more information, call SLCHA at 315-386-8133, e-mail [email protected], or visit their website.In addition to SeaComm Federal Credit Union, other sponsors include Gene and Connie Barto, and Stewart’s Shops.

The St. Lawrence County Historical Association at the Silas Wright House is open Tuesday through Saturday noon to 4 p.m., Friday noon to 8 p.m. Admission to the museum is free- admission to the archives is free for members and children, $2.50 for college students, and $5 for the general public. The St. Lawrence County Historical Association is located at 3 E. Main St., Canton. Parking is available in the back of the SLCHA, next to the museum’s main entrance.

Photo: Union troops from the 2nd Michigan in the field during a previous Civil War Reenactment Weekend.