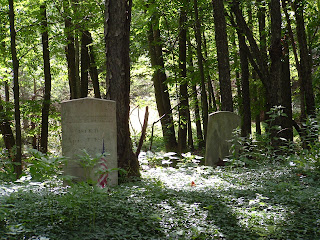 Many years ago, I was fortunate enough to meet the late historian Kenneth E. Hasbrouck, Sr., who at that time was the Executive Director of Historic Huguenot Street located in New Paltz, New York. I requested a meeting with him to inquire about a house that my aunt owned at that time.

I knew that he also had a connection to that home, as a child. He confirmed this and also verified that at one time, there had been a cemetery in the back of the home which was long gone- the bodies were removed and relocated to the New Paltz Rural Cemetery on Plains Road. This started my obsession with not only this house, but the former burial ground on the property.

Kenneth Hasbrouck directed me to one of his many books that had a reference to the home and the cemetery. There was also a mention of these things in a book complied by Dr. J. Wilson Poucher and Byron J. Terwilliger entitled Old Graves of Ulster County. It was published by the Ulster County Historical Society in 1931. The “Freer Family Ground,” as they called it, was already gone by the time Poucher and Terwilliger put together their book of headstone inscriptions. The ground, they noted, was “in cultivation.” They could, however, locate a few of the family’s headstones which were “mostly slate and field stones thrown in a heap on the D.B. Freer Farm. “

Some 60 years later, I stumbled upon what was left of these headstones, including one incorporated into the chimney of the home. It was the stone of Isaac Freer. If it had not been been for the foresight of Poucher and Terwilliger, the names and stones might have been all but forgotten, as would other countless burying grounds. 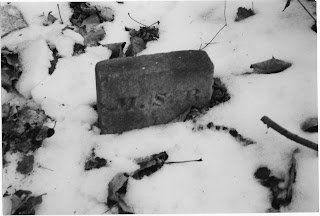 Poucher was a medical doctor who had a passion for local history. He was one of the founders of the Dutchess County Historical Society and had compiled a book similar to the one mentioned above for them. The purpose of his Ulster County book was twofold. The first reason was he wanted to approach the topic from a genealogical perspective. Poucher noted that prior to 1880, records were not always kept on individuals interred in graveyards or burial grounds. Sometimes they were kept by a church or by families of the deceased- generally speaking, however, records were not readily available to those researching their ancestors. Only after 1880 were such records available, as they were required by law. Poucher’s second reason for his compilation was for preservationist purposes.

G.D.B Hasbrouck, who wrote the foreword to this book, echoed the sentiment of Poucher when he wrote that these old burying grounds were disappearing, like the Freer burying ground on my aunt’s property. He continued that their chief enemies were not only “time,” but weather as well. Time had in fact toppled stones, while others were “scaled with lichen-” this made many of these stones hard or impossible to read.

Poucher did not accumulate all of this data alone. He had a partner that he worked with who lived in New Paltz. This individual, Terwilliger, was a local teacher who had loved local history like Poucher. In Terwilliger’s obituary in the Kingston Daily Freeman in 1962, it was remembered that he had one of the best Indian artifact collections in the area, which he eventually donated to a local museum. Together, Poucher and Terwilliger combed the countryside for old burial grounds so that they could meticulously document those who had been interred. Their recordings included the person’s name, birth date, death date, and military status, if any- no epitaphs were noted.

Recently, I passed the property which is no longer owned by my family. It prompted me to think about that old Freer Family Burial Ground. It also moved me to think of what had become of some of the burying grounds that had been visited by Poucher and Terwilliger over three quarters of a century ago. There are so many that it would be a monumental task to visit them all. Instead, I decided to focus on three that I pass frequently.

Both Terwilliger and Poucher visited the Merkle Ground on November 22, 1930. It is, as it was then, located on the road between Minnewaska and Kerhonkson. Today this road is State Highway 44/55. It sits on a small hill just off the road next to the Old Log Cabin Restaurant. The men recorded that the burial ground was “overgrown with shrubbery.” There were three graves there, which included those of: “James Countryman, Elias Merkle, and Charles Woodruff.”

Since their visit there four decades ago, the gravestones are still easily readable and the burial ground is in a much better state than it was when they viewed it. A small United States flag marks the grave of Woodruff, a Civil War Veteran. His grave is free of debris. It has fared better than some of the other small burial grounds because it is maintained by a local volunteer organization and a local veteran’s group. 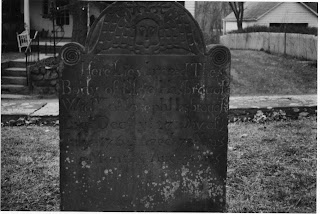 Another place I encounter often is a church burial ground on Route 209 in Rochester near Accord, New York. The burial ground is located behind the Rochester Reformed Church. Poucher and Terwilliger recorded on “October 12, 1929” that the burial ground was “badly overgrown with shrubs and brambles.” Just as the final resting place mentioned above, fortunately this cemetery is also being cared for and tended to. It is located across from the school bus garage on the west side of Route 209.

Although there is no date noted, Terwilliger visited the Put Corners Cemetery in New Paltz located on South Putt Corners. He did not record the state of the cemetery, so it can be assumed that it was in good shape. A good number of the inscriptions here were compiled in the 1920s. It should be noted that during this time, Put Corners was a much different place- the NYS Thruway did not yet exist and the area around the cemetery had not yet been developed into a large commercial center. This has been confirmed by the New Paltz Historic Preservation Commission’s website. It is lucky that the grounds survived this massive change to surrounding areas. When I pass by the cemetery today, it is maintained and thus is still in a good state.

These are just a smattering of the many burial grounds that the two men recorded. Currently, many of the cemeteries they addressed are still in existence, though some are harder to find than others due to vague or dated descriptions used by the two men such as “2 miles west of the road to Mettacahonts” or references to the “Minnewaska-Kerhonkson Road”. Many of the landmarks, farms, and individuals they referenced are also dated, which presents an obstacle. Fortunately, though, Poucher’s vision of the importance of preserving burial grounds, and documenting those interred within them, has come to fruition- the records he created are a valuable tool for genealogists, local historians, and anyone else who is interested.

Photos: Above, Woodruff grave with flag, Kerhonkson, New York- mi
ddle, headstone believed to be from the Old Freer Burial Ground- and below, Headstone of Elsie Hasbrouck in the Old Huguenot Burial Ground on Huguenot Street in New Paltz.