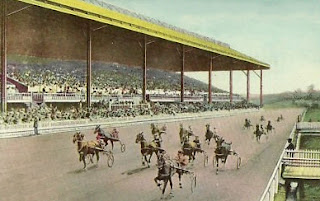 Inspiring stories of success are often rooted in the lives of people widely perceived as being handicapped, yet somehow managing to overcome daunting obstacles. A fine North Country example is Eddie “Peg Leg” Jones, who narrowly escaped death as a young boy but lost a leg in the process.

For most people, the loss of a limb might well be the focus of the remainder of their lives. But Eddie’s story is one where outstanding achievements offered no hint on the surface that great physical impairment had been overcome.

Edward Jones was born in January, 1890, in New Haven, New York, southwest of Pulaski and just a few miles from the shores of Lake Ontario. Life on the family farm included hunting, and just a few weeks before his thirteenth birthday, Eddie suffered a terrible accident. While crossing a stone wall, he was struck by the accidental discharge of his shotgun. The injuries were severe, and amputation above the knee was necessary.When he entered adulthood, Eddie engaged in the horse trade, buying and selling farm stock along the western foothills of the Adirondacks. Harness racing had long been a mainstay of North Country life, and dozens of communities hosted half-mile tracks. Through his love of working with horses, Eddie was drawn to the sport, so he jumped in with one foot.The physical activity involved in training horses was challenging, but Eddie had no intentions of stopping there. He wanted to drive. Granted, it could be rough and rigorous, but it seemed a plus that this was a sport where the participant sat while competing.That was true, of course, but without a second leg to provide balance and body control while racing, Eddie would have to improvise. A thick leather pad between his body and the sulky frame was all he used for support. He learned to balance by trial and error.By the time he was 22, Eddie had proven he could drive. Using three main horses and racing at venues from Watertown to Batavia, he gained experience and earned several wins. Three years later (1915), behind five main mounts, Jones’ skills as both trainer and driver were unquestioned. At Gouverneur, Canton, Watertown, Fulton, Rome, and Cortland, he was a multiple winner. More success came at Batavia, Elmira, and De Ruyter, and at Brockport, Ontario, Canada, as well. Other forays outside of New York to Mount Holly, New Jersey, and Hagerstown, Maryland, led to more wins. In 120 heats, races, and free-for-alls, Eddie took first place 64 times, finishing outside of the top three on only 26 occasions.While training and racing horses could be lucrative, it was also expensive. Eddie was married by then and needed a steady income, some of which was earned from bootlegging during Prohibition.  He routinely smuggled booze in the Thousand Islands area until he and several others were arrested shortly before Prohibition was repealed.

After that, Eddie assumed a more legitimate lifestyle, managing hotels and other establishments while continuing on the racing circuit from Buffalo to Ogdensburg. In the winter he competed in ice races, which were often as well-attended as the summer races. Heuvelton, one of the smaller venues, once drew more than 600 for an event held in February.Through the 1930s, Jones continued to win regularly on tracks from Ormstown, Quebec, to Syracuse, Elmira, and Buffalo, and many stops in between. The nickname “Easy Pickins” followed him, based on two things—his initials (for Edward Parkington Jones), and his uncanny use of pre-race strategies that helped him rise to the occasion at the end of a race.In 1936, Jones took over as manager of the Edwards Hotel in Edwards, midway between Ogdensburg and Watertown. While working there, Eddie dominated the regional racing circuit and increased his stable of horses to 16.He also began competing in Maine, but in the late 1930s, like so many others during the Depression, Jones fell on hard times. Though he was winning regularly, Eddie was forced to auction his horses, and in 1939, he filed bankruptcy. Life had taken another tough turn, and it looked like Jones, now 49, would end his career on a low note.But “Peg Leg” Jones, as he was widely known in the media, was far from average. If losing a leg at age 12 hadn’t stopped him, why would he give up now?And he didn’t. Eddie frequented the same tracks where he had raced over the years, now driving for other horse owners who were happy to have him.  Eventually, Syracuse horseman Charles Terpening hired Jones to train and drive for him. Relieved of day-to-day money worries, Eddie flourished. In the early 1940s, despite his age, he began winning more and more races, particularly behind a famous horse, The Widower.Soon Eddie was a big name in harness racing across the state, winning at Saratoga and many other venues, and competing on the Maine circuit as well. But the best was yet to come.At the end of the1944 season, Peg Leg Jones was the winningest racer in the US Trotting Association (covering the US and the eastern Canadian provinces). No one else was even close to Eddie’s total of 152 victories (86 with pacers and 65 with trotters).Such a heavy schedule surely took a toll, and in the following year, Eddie (what did you expect?) took on even more work. Driving in 437 races across the Northeast, Jones, now 55, once again led the nation in wins with 118. His blue and red-trimmed silks became famous at northern tracks as he finished in the money in 78 percent of his races.Jones had another excellent year in 1946, and continued racing and winning for several more years. In 1948, at the age of 58, Eddie set the track record at Booneville, just as he had done at Gouverneur in 1934 and Sandy Creek in 1942.In the early 1950s, Jones began entering horses at Dufferin Park in Toronto. After an illness for which he was treated in the hospital at Oswego in fall 1952, he went once again to Toronto in January. It was there that Eddie’s journey came to a sudden, tragic end.On January 7, his lifeless body was found in the tack room. Eddie’s throat had been cut, and a razor lay nearby. More than $2500 was found on him, and with no apparent motive for murder (like robbery), his death was officially ruled a suicide. No one knew for sure the reason, and the truth will be clouded forever. As one report said, “The ‘backstretch telegraph’ laid it to a jealous husband or a money deal gone bad.” On the other hand, the suicide angle was supported by the money found on his person, and the fact that he had recently been ill. It was suspected that he may have had a serious disease or was in a lot of pain.The tall, slim form of Eddie “Peg Leg” Jones would be missed by many. He won hundreds of races and thrilled thousands of spectators, and for more than four decades, the man with one leg had stood tall in the world of harness racing. Photos: Top?Saratoga Trotting Track. Bottom?Trotting scene from 1915.
The Eddie “Peg Leg” Jones story is one of 51 original North Country history pieces appearing in Adirondack Gold: 50+ New & True Stories You’re Sure to Love (352 pp.), a recent release by author Lawrence Gooley, owner of Bloated Toe Publishing.