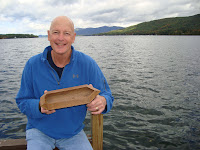 In the autumn of 1758, the British sank over 260 warships in Lake George to protect the vessels over the winter of 1758-1759 from their enemy, the French and their Native American allies. Many of the sunken warships were recovered in 1759 and reused by the British.  However, over 40 sunken warships were never retrieved by the British forces in 1759 and they offer underwater archaeologists an excellent opportunity to study these shipwrecks to find out about the colonial soldiers that used them.

Zarzynski’s June 5th program, hosted by the John Thurman Historical Society, is free and open to the public, and refreshments will be served. Thurman town hall is located at 311 Athol Road, Athol, NY, about 6 miles from the Warrensburg Health Center via route 418 and Athol Road. For more information, call 518-623-9305.

Photo: Joseph W. Zarzynski holds a model of the type of 18th century radeau that plied the waters of Lake George during the French and Indian War (Photo courtesy Peter Pepe).