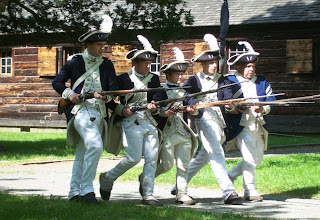 On the 4th, at 3:00 P.M., New Windsor Cantonment invites visitors to help read the Declaration of Independence, the revolutionary document that started it all. Following the reading, the 7th Massachusetts Regiment will fire a &#8220feu-de-joie,&#8221 a ceremonial firing of muskets in honor of independence.

Throughout the day authentically dressed soldiers and civilians will share stories of life from that exciting time. Knox’s Headquarters, the Ellison House, honors the site’s namesake General Henry Knox, Washington’s Chief of Artillery, with the firing of a 4 1/2 &#8221 bronze coehorn mortar at 12:00 P.M. and 4:00 P.M. This mortar, designed to be carried by two men, fired a grenade size exploding ball. John and Catherine Ellison were gracious hosts to three Continental Army generals at different times during the Revolutionary War.

In addition to the special programs and activities, the National Purple Heart Hall of Honor and the New Windsor Cantonment Visitor Center are open. These buildings feature the history of the New Windsor Cantonment- Behind Every Great Man: The Continental Army in Winter, 1782-83, Revolutionary War artifacts, the exhibit The Last Argument of Kings, Revolutionary War Artillery and the story of the Purple Heart.

A picnic grove is available and there is plenty of free parking. Just one mile from the Cantonment is Knox’s Headquarters State Historic Site. Elegantly furnished by John and Catherine Ellison, the 1754 mansion served as headquarters for Revolutionary War Generals Nathanael Greene, Henry Knox, and Horatio Gates. Also be sure to visit Washington’s Headquarters in Newburgh, a short drive from the New Windsor Cantonment.