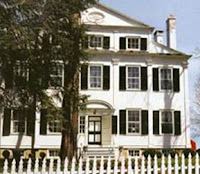 CIRCA, a tour of historic farmhouses this Sunday, June 10th, aims to highlight the rich and varied architecture that remains from the late 18th and 19th centuries, when the New Paltz area was part of the Nation’s breadbasket.

CIRCA will feature six local homes, all of which have strong ties to this pivotal period in America’s history. Also included on the tour is an 18th century Dutch-style barn, today home to Adair Vineyards, and an artist’s studio created from a unique early 19th century stone barn.

It was the bounty of the Hudson Valley and the industrious nature of our 18th and 19th century farmers that helped feed our young country – especially burgeoning cities such as New York.

Farming in this era involved individuals of all social strata, from the wealthiest of gentleman farmers, to the hardworking tenant farmers who made it possible for the prosperous to extract wealth from the huge tracts of land they controlled.

Among the homes included on the tour is early 19th century home of Thaddeus Hait. Hait, from a well-to-do Westchester County family of the time, moved to the then newly-formed town of Plattekill. By 1828, he had accrued 153 acres, some of which is still farmed today. His home is an interesting example of how the refined Neoclassical style was interpreted in a decidedly rural setting. The result is an otherwise modest home that endures as an example of the optimism and aspiration of its builder. Outside, the home features an unusual second floor “Juliet” balcony. Inside, high style mixes with exposed stone walls and brick floors. The current owners have lovingly preserved the home and the surrounding outbuildings.

Two short miles away, as Hait staked his claim, Josiah Hasbrouck and his wife Hylah Bevier lived in a striking Federal-style showpiece they completed in 1814. This home, known today as Locust Lawn, was at the heart of a massive 1,000 acre gentleman’s farm. Josiah and Hylah, who each were descended from the earliest Huguenot settlers of the area, presided over a home truly remarkable for its time. Lived in by three generations of their family, the home was shuttered in the 1880?s – in effect turning it into a time capsule of one family’s unique history. A preserved museum home today, the home has been closed to the public for the past two years and is normally open only by appointment.

On the other end of the spectrum is a humble home owned by DuBois Hasbrouck and dating to the late 18th century. This home, built for tenant farmers, represents the lives of the families who toiled to get a toehold on the American dream. This simple one-and-a-half story home, expanded over time, still sits along a gentle stream with views of the fields all around.

Capping off the tour will be a reception at the Maplestone Inn, a substantial stone house built by John L. Jenkins and Mary Catherine Broadhead in late 18th century. Innkeepers Sean and Patty Roche have generously agreed to open their renovated streamside barn for the reception.

CIRCA will be held on Sunday, June 10th, from 11am to 5:30pm. Advance tickets are $25 and can be purchased at www.casaulster.org or by calling (845) 339-7543. Day of tickets are $30 each. The event is presented by Court Appointed Special Advocates for Children (CASA), which works to ensure that foster care is temporary and that all children can grow up in safe, loving and permanent homes. CASA was founded in Ulster County in 1987 and is one of over 950 CASA programs across the country. More information about CASA can be found at www.casaulster.org.