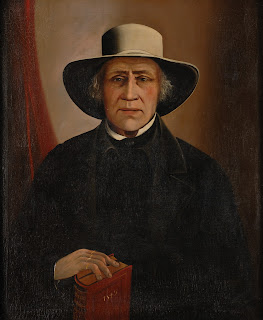 Artist and Visionary: William Matthew Prior Revealed, the first exhibition devoted solely to this American folk artist, has opened at the Fenimore Art Museum in Cooperstown, New York. The exhibition includes over 40 oil paintings spanning his lifelong career from 1824 to 1856 and will be on view through December 31.

“Of the many 19th century folk portrait painters, William Matthew Prior is one of the most accomplished and interesting,” said Fenimore Art Museum President and CEO, Dr. Paul S. D’Ambrosio. “The exhibition, expertly curated by Jacquelyn Oak, explores the blurry line between folk art and academic art in the early 19th century, and the intersection of folk art and the myriad reform and religious movements of the era.”

Prior began his artistic career in Maine in the 1820s and settled in Boston in the 1830s with an extended group of colleagues and family members. Under his leadership, this group revolutionized folk portraiture. Prior was the first folk artist to institute a price scale, offering to paint likenesses “without shade or shadow” at one-quarter the cost. This innovation made his portraits widely available to a diverse group of sitters, and allowed him to compete with more accomplished academic painters in the Boston area. The late 1840s and 1850s were among his most productive artistic times, with some of his best-known and best-loved paintings dating from this period.

Prior was an important figure historically, as he became involved in a variety of reform movements. He was a follower of the religious leader William Miller (Millerism or early Adventism) who was instrumental in Prior’s personal development and provided access to new clients. He painted several Millerite banners explaining the visionary’s unique reading of Biblical prophecy.

Prior’s catalog of work thoroughly documents 19th century middle-class Americans including a large number of African-Americans. His portraits have been studied by scholars and appreciated by art enthusiasts for the past 80 years.

A fully illustrated catalogue with essays by Jacquelyn Oak and Gwendolyn DuBois Shaw accompanies the exhibition.

3 thoughts on “First Exhibit Devoted Solely to William Matthew Prior”