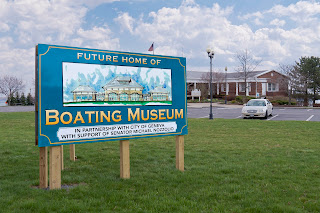 The City of Geneva and the Finger Lakes Boating Museum have announced that grant agreements totaling $2,450,000 in state funds for the development of the Boating Museum and Visitor Center have been received and are being executed.

The funds will be used for the design and construction of a museum showcasing boating and boat building in the Finger Lakes region, as well as an enhanced visitor center. The project will be developed on the north shore of Seneca Lake on the site of the existing visitor center.

The State of New York announced two separate grant awards, the first a $2,000,000 grant from the Dormitory Authority of the State of New York, secured through the efforts of State Sen. Michael Nozzolio. The second grant of $450,000 from New York’s Local Waterfront Revitalization Program was announced as part of the 2011 Consolidated Funding Application process.

“After many months of planning, we are very pleased to be getting under way soon in providing Geneva and the entire Finger Lakes with a beautiful museum that will bring to life the history of boating and its influence on life in the Finger Lakes” said Vince Scalise, President of the Finger Lakes Boating Museum Board of Trustees. “We look forward to cooperating with the City in bringing this educational facility to the lakefront for all to enjoy and to learn.”

The City has selected Pittsford-based Hanlon Architects for design and engineering, which will begin immediately, and Chrisanntha Construction for construction of the project, which is slated to begin this fall.

Interested persons can see some of the Museum’s collection of boats on display at the 2012 Boating Festival in the Geneva Lakeshore Park Saturday (10-5) and Sunday (10-4), July 14 and 15. The Show will be held the same days as the Musselman Triathlon 2012 races and events.

Many of the Museum’s wooden rowboats, power boats, and canoes built in the Finger Lakes will be on display. Activities will include workshops and demonstrations on boat building and restoration, interactive nautical displays and a sailing regatta. For more information, check the Boating Museum’s website at www.flbm.org.

The Boating Museum reached agreement with the City of Geneva in the fall of 2009 to establish a permanent home on the Geneva waterfront in association with a Visitor Center.

The Boating Museum has assembled a collection of more than 115 wooden boats built in the Finger Lakes over the past 100 years, as well as numerous related artifacts and extensive reference material. Portions of the collection will be displayed on a rotating basis within the new facility, but President Scalise emphasized that there will be a lot more to the museum than viewing boats because education, restoration and preservation are the key elements of the museum’s mission.

Also featured will be boat rides on Seneca Lake, active on-water programs including sailing and small boat handling, interactive workshops and displays to engage visitors in the design and construction of boats and boating history materials and programs.

Photo: Construction of the Finger Lakes Boating Museum and Visitor Center will begin this fall on the north shore of Seneca Lake in Geneva.