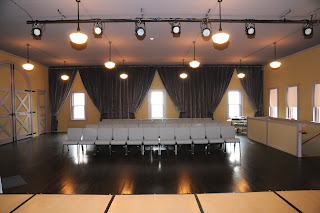 The Cayuga Museum has announced that Theater Mack, the carriage house undergoing renovation for the past several years, has reopened. A massive brick building originally constructed around 1850 on the foundation of an earlier wooden barn, the carriage house was turned into a theater in 1941 through a collaboration between the Cayuga Museum and the Auburn Community Players.

Once known as the Museum Playhouse, the building became the cultural hub of Auburn from the 1940’s through the 1960’s. The building gradually fell into disuse after the Auburn Children’s Theater, the company that became the Merry-Go-Round Playhouse, outgrew the space in the 1970’s.

The in mid-1990’s, the Board of Trustees of the Cayuga Museum set an ambitious goal of restoring each of the three buildings on the Museum property. The Museum has been steadily working on that goal ever since. Before beginning on the carriage house, the Museum completed more than $1.2 million in capital improvements on the other buildings. The Case Research Laboratory, birthplace of talking films, was restored and re-opened, and the Willard-Case Mansion in which the Museum is housed was renovated. The first phase of the carriage house project was finished in May 2010, at a cost of more than $248,000. 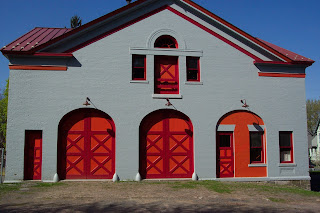 In 2011, the Museum named the carriage house Theater Mack in honor of long-time supporters the Maciulewicz family and their company, Mack Studios. Now, the Museum brings the project to fruition and the building returns to use as a multi-purpose space equipped for everything from a musical production to a wedding reception.

Theater Mack is a perfect little “jewel box” of a theater, retaining much of the charm of its 19th century beginnings and adding modern amenities. There is now heat, air-conditioning, restrooms, dressing rooms, and a catering kitchen, as well as a first-class sound system, and theater lights and draperies. The lower level and the main floor have been completely renovated but the second floor, where Theodore Case created a sound studio to make his test films in the 1920’s, remains intact. The Museum now turns its attention to plans for a new Case exhibit including both the laboratory and the sound studio.

It’s taken the same kind of collaboration that originally put the theater in the building during WWII to bring the project to fruition today. New York State, local foundations and many individuals and families donated more than $600,000 to the project. Several local contractors contributed their work at or below cost. The completion and re-opening of Theater Mack is a triumph for everyone involved. This totally unique building will become an asset to the Museum and the community for decades to come.

The new Finger Lakes Musical Theatre Festival has rented Theater Mack for ten weeks this summer for their concept show, The Pitch. The Cayuga Museum is already programming film screenings, lectures and shows for Theater Mack for the rest of the year and it is available for rent to organizations and individuals.