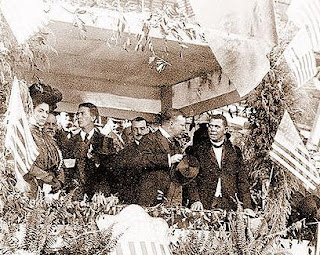 Prior to 1901, no black man, woman, or child had ever been invited to have dinner with the President at the White House.  In Guest of Honor: Booker T. Washington, Theodore Roosevelt, and the White House Dinner that Shocked a Nation (2012, Atria Books), historian Deborah Davis puts a spotlight a 1901 dinner invitation by President Theodore Roosevelt to African-American educator and activist Booker T. Washington. The event marked the first ever invitation of its kind of a Black American to the White House.

The invitation was enough to cause a scandal that threatened to derail the early plans of the Roosevelt Administration and threatened the lives African Americans – in particular Booker T. Washington and his loved ones. However, for the two men who the author argues led &#8220astonishingly similar lives,&#8221 the union at the dinner table was one that wouldn’t be avoided out of fear.

Davis was inspired to write Guest of Honor by John McCain’s concession speech on election night in 2008, when he mentioned Obama’s victory as proof of the fact that our country has come a long way since the scandal in 1901. Davis had never heard of the scandal, but soon after uncovered a fascinating story about two historical figures and America at the turn of the century.

President Theodore Roosevelt invited Booker T. Washington, former slave, distinguished educator, and renowned orator, to have dinner with the First Family in the White House family quarters. Booker T. accepted, and along with Mrs. Roosevelt, their sons, and another guest, spent a convivial evening eating, drinking, and discussing politics and current events. The next morning, the news that a black man had dinner with the President at the White House sent shockwaves through the nation. Although blacks built the White House and worked for most of the Presidents, including Roosevelt, not a single African American had ever been invited to dine there.

The repercussions of Roosevelt and Booker T.’s dinner were immediate. It was a slap in the face to those who believed that all men (and especially men of color) were not created equal. In their minds, Roosevelt’s dining room had become the new Gettysburg, an important battleground in the war against integration. Fueled by inflammatory newspaper articles, political cartoons, fire-and-brimstone speeches, and even vulgar songs, the scandal escalated to the point where this one dinner divided the country, ignited a racial storm, and threatened to topple two of America’s greatest men.

To write Guest of Honor Davis researched TR and Booker T., including books, essays, and newspaper articles about them, as well as a trove of letters and memoirs that they had written themselves.