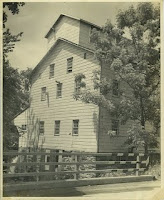 In 1788, the same year as France was moving closer towards revolution and the United States Constitution was being ratified, a young man made his way to the area that would one day bear his name. His name was Selah Tuthill. He founded what would become known as the Tuthilltown Gristmill in Gardiner, New York. Once the mill started churning out stone ground flour, it would do so continuously for over two hundred years until its second life as a restaurant and distillery.

Tuthill was born in Orange County on October 26, 1771. He bought the mill when he was only eighteen years old, in 1788. The area where Tuthill bought the mill still bears his name today &#8211 Tuthilltown. He built the mill, one of the first in the area, on the Shawangunk Kill after purchasing a 60 acre lot from the Sammons family.

According to the 1800 Federal Census, Tuthill had three slaves helping with the day-to-day operations of the mill. He also had a large family of eight children with his wife, Sara Schoonmaker, who he had married in 1794. This mill would be the first of three on the Shawangunk Kill. The Beers Map of 1875 clearly shows a saw mill and gristmill. It occupied a choice spot on Old Albany Post Road &#8211 a major road linking the region to Albany.

Tuthill made a considerable profit from his mill and became an influential member of the community. In 1804, he was elected to the New York State Assembly serving Ulster County until 1805. He would later move to Orange County where he would be elected again to the New York State Assembly, but this time representing Orange County. Finally, in 1821, the year of his death, he had been elected to the United States House of Representatives, but died before he could take his seat. Tuthill was interred in Marlboro, New York in Ulster County.

Meanwhile, the mill Tuthill had run since he was eighteen years old, The Newburgh Evening News reported, had been taken over my his son Daniel. It was subsequently sold to Joseph O. Hasbrouck , who also ran a store, as well as a blacksmith shop. This was in addition to being the local postmaster and a teacher. After Hasbrouck, the mill was taken over by Ludwig Brand, and it was from him that the mill’s last owners, the Smith family, purchased it in 1941.

The Smith family held the distinction of being the last family to run the mill as such for over five decades. Before it was sold by the family, it held the distinction as the oldest continuously running mill in New York State. In the 1980s, it was added to the National Historic Register. The mill was known well in the Jewish community- starting in the 1980s, Tuthill’s old mill ground flour into Passover matzo for observant Jews living in New York City. The 52 inch stones at the mill ground approximately 600,000 pounds of flour every year. It is important to point out that as late as the 1970s, the stones which ground grain into flour were originals.

Even though the mill stopped operations early in its third century, it still continued to make history. According to the website of the mill’s new owners, Ralph Erenzo and Vicki Morgan, the mill was purchased by them in 2001- they acquired the property with additional help of partner Brian Lee. They converted one of the mill granaries into a micro-distillery called Tuthilltown Spirits. Currently, it is the first distillery in Ulster County since Prohibition. The three individuals eventually sold the actual gristmill, which is now enjoying a second life as a restaurant called the Tuthill House at the Mill which is owned by the Gabriello family.

There is still plenty to see at the historic gristmill site. The building remains largely unchanged. What is missing is the large water wheel that Tuthill would have remembered. However, it was replaced in the late 19th or early 20th century with more modern equipment. The distillery is open to the public, as is the restaurant. Visitors can also gaze at the historic Shawangunk Kill and even view the old mill dam. Scenically, the area is still as breathtaking today as it was when Selah Tuthill settled here three centuries ago.

Picture of the Tuthilltown Gristmill around 1940 appears courtesy of Nick Kay.