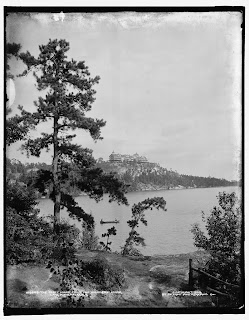 Minnewaska State Park Preserve has become a popular destination for hikers, bikers, and nature lovers. It is crisscrossed with acres of pristine views, carriage trails, and hiking trails. Many people visiting there do not realize that it once was the site of two spectacular mountain houses that sat perched on the cliffs overlooking Lake Minnewaska. They were named Wildmere and Cliff House.

The start of these two mountain houses can be traced back to the Smiley twins, Alfred and Albert, who earlier founded the famous landmark Mohonk Mountain House.

The site of the first mountain house, Cliff House, was found in 1875 while Alfred and his brother were on a day excursion from the Mohonk Mountain House they founded years earlier. Alfred gazed upon Lake Minnewaska, which was then called Coxing Pond, and decided it was a perfect site for a mountain house.


Shortly after visiting the pond, Alfred inquired about who owned the lake. He was told, according to the book Mohonk: Its People and Spirit that George Davis owned it. Alfred purchased over 2,000 acres of land and construction of the first of two mountain houses began in 1877. It would be named Cliff House.
The mountain house was completed by 1878, and Alfred, who was at the time the manager of Mohonk, moved with his family to Cliff House. Guests who stayed at Cliff House were allowed to travel back and forth between Mohonk and Minnewaska by way of a carriage road. Eventually, another hotel on the opposite side of Lake Minnewaska, christened Wildmere, was completed in 1881. The combined houses could accommodate over 400 guests. Alfred Smiley continued to expand the property until his death in 1903.

The Minnewaska Mountain Houses remained in the Smiley family until 1955 when they were acquired by the Phillips family in 1955. Kenneth B. Phillips, Sr. worked for the Smiley family- as stated in a newspaper interview, he came to Minnewaska in 1927. Lake Minnewaska’s mountain houses continued to thrive until the late 1960s and early 1970s when interest in the mountain houses began to decline. Finally by 1972, Cliff House was abandoned because the Phillips family did not have the financial resources for the upkeep of the mountain house. It was decided that the family’s resources should be concentrated in Wildmere. A fateful mistake had been made by the family when they shut the water off to Cliff House, which also cancelled the insurance policy on the structure.

New York State, by this time, hoped to avoid development of this pristine area of Ulster County. In 1969, the state began purchasing property from the family. In addition to New York State, the Nature Conversancy also started to buy parts of the property. According to the Daily Freeman, by October 2000, the state purchased 7,000 acres for 1.5 million dollars.

By 1976, the owners of the Cliff House and Wildmere filed for bankruptcy. Brian Anglin wrote that in 1977, the Philips family, who was now out of money, put Minnewaska up for sale. New York State eventually moved in and purchased 1,400 acres of land with an additional 200 acre easement. Anglin continued that after all the purchases had been made over the years, the family was left with 1,200 acres which included the two mountain houses and the lands around them. Phillips, Jr., who had run the resorts, hoped to reopen Cliff House and also build luxury condos on the property. The furniture, and anything of value, was auctioned off by the family. Concerns emerged about vagrants who were lighting fires and destroying the empty hotel. There was fear of a fire starting in the abandoned structure- that fear became reality in the first days of 1978.

According to most sources, such as The New York Times, the fire that destroyed the Cliff House started in the evening of New Year’s Day. A report of a structure fire was phoned into the Accord Fire Department at 8:30 PM. Accord Fire Chief Lowell Baker, whose district the hotels were located in, arrived first on the scene. Seeing the size of the fire, which was spreading quickly through the wood structure, he promptly called for mutual aid from the neighboring Kerhonkson fire district as well as from other local fire departments. As the flames leapt 75 feet into the winter sky, according to The Huguenot Herald, roaring fire-fighting vehicles headed to the scene but were halted on Route 44/55 at the gate to the property. It turned out that inclement weather prohibited safe travel up to the hotel.

Those trucks that attempted to navigate the snowy, icy, twisting, and winding approach to the mountaintop resort realized that their attempts were futile. The vehicles did not have chains on their wheels and had to turn back, or in some cases, slide back. Only those trucks that had four-wheel-drive were able to make it to the top. As the heavy snow continued to hamper firefighting efforts, the Newburgh Evening News reported that the water and sprinklers had been shut off in the structure- this denied firefighters a valuable water source once they were able to get to the top of the mountain.

The awful fire was over by 12:30 AM- a century of history was reduced to smoking ruins. The community mourned the loss of the mountain house. Fortunately, Wildmere still stood unscathed. It too finally closed in 1979. The fight was on to save this environmental treasure property from development, which appeared imminent by way of the Marriott Corporation who wanted to build a high-end resort. This plan was finally defeated in 1985.

Unfortunately, however, on a Thursday afternoon in June of 1986, Wildmere also burned down and brought about the end of an era of the grand mountain houses of Lake Minnewaska. New York State finally bought the rest of the Lake Minnewaska resort, and opened the preserve that many people still enjoy today. According to a recent Poughkeepsie Journal article, the Minnewaska property has grown from its original 10,000 acres to about 22,000 currently. The most recent acquisition was Little Stony Kill Falls.

Photo courtesy of Library of Congress.