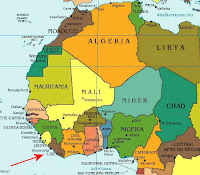 In 1822, three months after Champlain, New York, native Jehudi Ashmun’s colony of freed slaves landed on Africa’s west coast (and two months after losing his wife), the group faced impending hostilities from surrounding tribes. The attack finally came on November 11. Ashmun, a man of religious faith but deeply depressed at his wife’s death, was suddenly thrust into the position of impromptu military leader.

Approximately ten kings of local tribes sent 800 men to destroy the new settlement, which held only 35 residents, six of whom were younger than 16 years old. Many among them were very ill, leaving only about 20 fit enough to help defend the colony. By any measure, it was a slam dunk.
The results are now legendary: against incredible odds, the settlers routed their attackers. It was a great victory, but the fight wasn’t over. Immediately, and for days after, Ashmun worked to improve their defenses, fearing another attack. A confidant informed him his suspicions were warranted, and on November 30, via a foreign ship, Ashmun sent a desperate message to the American Colonization Society, sponsors of the new settlement.

“All the tribes around us are combined in a war against us. Their principal object is plunder. We are surrounded by only a slight barricade and can only raise a force of thirty men. … We endeavor to make God our trust. I have no idea but to wait for His deliverance—or to lay out our bones on Cape Montserado.”

The second assault, which came on December 2, was made by an even larger force, estimated at more than 1,000 warriors. Furious attacks were mounted, including at least four in one location, but all were repulsed. Within 90 minutes, and at great loss to the enemy, the settlement stood intact. Ashmun and his band of colonists had once again achieved the impossible.

It was truly the stuff of legend, marking the beginning of an incredible journey. Jehudi became the settlement’s de facto leader. As per the Society’s instructions, he assisted the new colony in establishing a constitution and code of laws based on those of the United States. Having negotiated deals with several kings before they had decided to turn against him, Jehudi now dealt with the task of mending fences and forging a peace agreement with his enemies.

During the next several years, he successfully navigated through myriad problems, daunting hardships, and frequent illness, leading the colony to success. A working economy was established and new territory was acquired, making for a promising future. 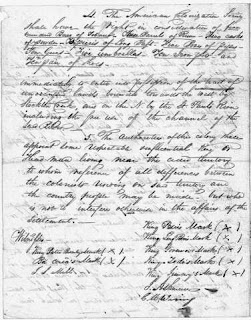 In a treaty signed with five kings, he once traded “500 bars of tobacco, three barrels of rum, five casks of powder, five umbrellas, ten iron posts, ten pairs of shoes,” and other items in exchange for land and certain rights. (See the illustration. At the bottom of the treaty are the kings’ names with their marks (X), and Jehudi’s signature near the bottom right.)

Ashmun was present for the birth and initial growth of the settlement, guiding the way to legitimacy. But in 1828, another serious illness struck, and on July 18, the great dismay, sadness, and appreciation of the entire colony was expressed when he returned to America for treatment.

Writing to his parents in Champlain, he expressed the hope and desire to return to the village in the coming months, but it wasn’t to be. On August 25, at the young age of only 34, Jehudi Ashmun died in New Haven, Connecticut, where he was buried.

The colony he established had become known as Liberia (“Land of the Free”), and its capital, originally Christopolis, had been renamed Monrovia after President James Monroe. Within a decade of the colony’s birth, those first few dozen settlers had grown to nearly 1,500 citizens- a daily newspaper had been established- a self-governing system of laws was in place- and the economy was supported by trade with other countries, just as Ashmun had envisioned.

In 1847, the Liberian colonists declared their land an independent republic, receiving official recognition from nearly all the world’s countries, with one notable exception: the United States. American recognition was withheld for a familiar reason—southern states refused to accept a black ambassador in Washington.

The US finally came through with recognition of Liberia in 1862, when the southern voices in Congress were silenced by their secession from the Union.

A century after Ashmun’s tiny group of colonists repelled those two initial attacks, Liberia was about the size of Kentucky and had a population of more than two million, which exceeded that of thirty US states. Oddly enough, as noted in 1919 by the National Geographic Society: “Of these two million or more inhabitants, only about 50,000 [12,000 of whom were of American origin] may be considered civilized and take part in government.” That’s only about 3 percent.

It’s rather ironic that a colony of former slaves, established to encourage freedom and provide a voice in their own governance, would one day restrict the freedom and rights of 97 percent of its own population, placing them at the whim of the other 3 percent. Sound familiar?

Further irony is found in Liberia’s constitution, which contains a clause carried forward for generations. It still exists today in Chapter IV, Article 27, Section b): “In order to preserve, foster, and maintain the positive Liberian culture, values, and character, only persons who are Negroes or of Negro descent shall qualify by birth or by naturalization to be citizens of Liberia.”

And so it is that in Liberia, directly translated as “the Land of the Free,” non-blacks are denied citizenship. Perhaps they became more like America than Jehudi Ashmun intended.

Still, there’s no denying the fact that, in light of its most humble of beginnings, and the changes we’ve seen to the globe even in the past 50 years, it’s amazing that Liberia still survives nearly two centuries after Ashmun first landed on Africa’s shores.

He was smart, tough, and wise, but another side of Ashmun that stayed with him throughout life is revealed through his own writings. Consider this self-assessment from 1819: “I am now 25 years of age- almost three years from college- have no profession &#8230- I am involved in debt, possess neither books nor money, and have a delicate and beloved wife to provide for.

“I am wearied with the same daily round of dull employment … of studying in circumstances forbidding the exercise of half the strength of my mental powers- of sleeping immoderately because I have nothing to do or to enjoy sufficiently interesting to keep me awake. … The future is a dreary expanse of storms and clouds, pervaded by a few faint gleams of hope.

“I am broken with disappointments- have been robbed by the perfidy and ignorance of supposed friends and the malevolence of enemies. &#8230- The frown of Heaven is upon me. My hopes for eternity are clouded.”

If at times you feel a deep hopelessness like that once expressed by Jehudi Ashmun, remember what he accomplished in the next few years of his life. Not bad for a North Country boy—or any boy, for that matter.

The Jehud
i Ashmun story is one of 51 original North Country history pieces appearing in Adirondack Gold: 50+ New & True Stories You’re Sure to Love (352 pp.), a recent release by Lawrence Gooley, who has authored ten books and dozens of articles on the North Country’s past. He and his partner, Jill McKee, founded Bloated Toe Enterprises in 2004. Expanding their services in 2008, they have produced 20 titles to date, and are now offering web design. For information on book publishing, visit Bloated Toe Publishing.