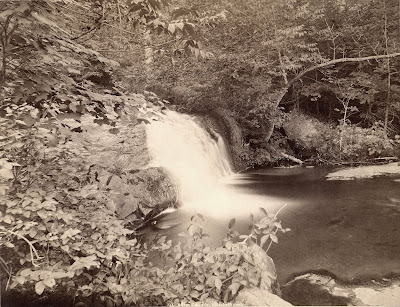 Long considered beautiful photographs of the Adirondack landscape, Seneca Ray Stoddard’s views also serve as documents of the plants that inhabited the region in the 19th century. Since he was rediscovered in the late 1970s, Stoddard’s work has been featured in numerous exhibits that explored the history of 19th century life in the Adirondacks. A survey of the 3,000 images in the Chapman Historical Museum archives, however, revealed hundreds of images that are purely natural landscapes. The subject matter is the Adirondack environment – not great hotels, steamers, camp scenes or other obvious evidence of human activity.

The Chapman’s summer exhibit, S.R. Stoddard’s Natural Views, features forty enlarged photographs of varied Adirondack settings – lake shores, marshes, meadows, riverbanks and mountainsides. Included are such locations as Surprise Falls on Gill Brook, Indian Pass, Lake Sanford, Ausable Chasm, Wolf Pond and Paradise Bay on Lake George. The exhibit examines these photographs as documents of the history of ecological habitats, providing an opportunity to consider the issue of environmental change – an issue as relevant in Stoddard’s time as it is today.

To address this issue the museum consulted with Paul Smith’s College biologist, Daun Reuter, and Don Leopold of SUNY-ESF, who identified botanical species in Stoddard’s photographs. Plants that they discovered in Stoddard’s photographs &#8212- from small flowers to shrubs and trees – are highlighted in modern color images supplied by Ms. Reuter and others and in digital reproductions of period specimens from the herbarium at the New York State Museum. These show details of the plants in their various stages – details rarely visible in Stoddard’s photographs many of which were taken late in the year after the plants had lost their flowers and started to wither.

By bringing attention to this group of Stoddard photographs, the exhibit will give visitors the opportunity to discover and reflect on the changing environment – a topic of urgent concern in the region. Through their experience visitors will gain greater appreciation for not only Stoddard’s photographic vision but also the natural world of the Adirondacks. The exhibit is funded by grants from the Leo Cox Beach Philanthropic Foundation and the Waldo T. Ross & Ruth S. Ross Charitable Trust Foundation and sponsored by Glen Street Associates and Cooper’s Cave Ale Co.

For those who wish to learn more, the Chapman Historical Museum has scheduled a series of programs (detailed below) to be held at both the museum at and other sites. The museum is located at 348 Glen Street, Glens Falls, NY. For more information call (518) 793-2826 or go to www.chapmanmuseum.org.

Part of the 7th annual Adk Park Invasive Species Awareness Week Bring your own canoe or kayak. Meet at Dunham’s Bay Marina For reservations call the LGA at (518) 668-3558