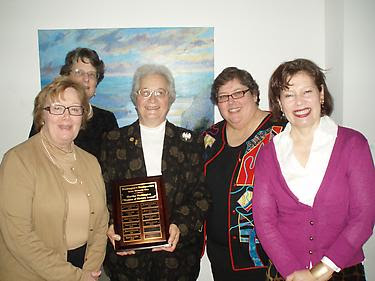 On Saturday, March 31st, Washington’s Headquarters State Historic Site honored Stella Bailey, the 2012 Martha Washington Woman of History Award during their annual program “The General’s Lady.” Bailey was selected for her dedicated service in preserving Hudson Valley history over fifty years. The ceremony was held in the Ritz Theatre lobby located on Broadway in Newburgh, NY.

Elyse B. Goldberg, Historic Site Manager, said in her welcoming address and conferring of the award, that though time did not permit her to list all the organizations and positions that Ms. Bailey has held over the years to be mentioned, Stella is at present the Executive Director and Financial Officer of the Fort Montgomery Battle Site Association, President of the Town of Highlands Historical Society, and the Highland Falls Town/Village Historian.

Family and friends of Ms. Bailey were in the audience along with some previous recipients of the Woman of History Award. They included author/historian Patricia Favata, City of Newburgh Historian Mary McTamaney, City of Newburgh Records Management Director Elizabeth McKean, and community activist Mara Farrell.

Dressed in their Revolutionary War military attire, members of the 5th New York Regiment led the audience cheer at the completion of the award presentation and Bailey’s acceptance speech.

The event was sponsored by the Palisades Parks Conservancy and the Friends of the State Historic Sites of the Hudson Highlands.