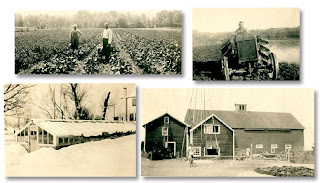 Those readers who follow my writing realize quickly that I have a special affinity for the Hasbrouck House in Newburgh more commonly known as Washington’s Headquarters, State Historic Site. Many of those visiting the site do not realize that a part of that site’s history can be traced back to Western Ulster County, New York where Jonathan Hasbrouck’s mother Elsie Schoonmaker was born and raised.

Elsie Schoonmaker’s descendants still farm the Rondout Valley some three hundred years later – their farm’s original 300 acres form its nucleus which has been continuously farmed since 1680. It is important to point out that this predates the formation of Ulster County by three years. According to the family, Saunderskill is the second oldest farm in the nation- the Hull family farm in Southhold, Long Island, is the first.

Saunderskill Farm gets its name from its location. The farm is located in present day Accord in the town of Rochester in Western Ulster County’s Rondout Valley. Nestled in between the Catskill and the Shawangunk Mountains, the farm sits alongside the Saunderskill which is a tributary of the Rondout Creek. During Elsie’s lifetime, this land was considered to be the frontier.

According to the Schoonmakers, which includes Rochester Historian Alice Schoonmaker, the story of the Dutch family started when 300 acres of land were granted to Lieutenant Hendrick J. Schoonmaker by Peter Stuyvesant in 1663. This land was for payment for his military service against the Native American tribe known as the Esopus, whom the Dutch settlers had been fighting in a series of two wars known as the First and Second Esopus Wars. According to Ruth Heidgerd’s Schoonmaker Genealogy, Lieutenant Schoonmaker had been wounded twice.

One of the family’s more famous ancestors was Elsie Schoonmaker. She was born to Jochem-Hendrickse Schoonmaker and Petronella Sleight in the late fall of 1685. Elise left the farm in 1706 when she married Joseph Hasbrouck of New Paltz whose father had been part of one of the original Huguenot families to settle New Paltz. The couple settled outside the village in an area known as Guilford on a 2,000 acre farm. Elsie and Joseph had, according to their oldest son Abraham, eleven children of which ten reached maturity. Shortly after Jonathan was born in 1722, Joseph died.

Elsie came from a long line of independent-minded women. Her grandmother was, according to tradition, the first licensed midwife for Esopus. Her name was Tryntje Tysen Bos. According to Alf Ever’s Kingston City on the Hudson, she became embroiled in a dispute with the Vice-Director of Fort Orange and a member of Governor Stuyvesant’s council. She had called him a “blood sucker.” Tryntje was subsequently fined- she claimed she had made the slanderous remark because of the stress of the recent Native American attacks on the settlement.

In 1749, Elsie Hasbrouck journeyed to Newburgh to purchase property from an individual named Burger Mynderse, Jr. She purchased 50 acres from him and an additional 49 acres from Alexander Colden, bringing her total purchase to 99 acres. Once her son was settled in Newburgh, she returned once again to Guilford where she lived out the remainder of her years, having started a store from her home.

“Widdow” Hasbrouck, as she became known later in life, died in1764 at the ripe old age of 78 years. She was not interred in Rochester but in the burying ground on Historic Huguenot Street in New Paltz, New York alongside her husband. Both of their headstones can be seen today. Her eldest son, Abraham, recorded his mother’s passing in his diary. He described her as being a tall woman, “good features in her visage or face.” She also had blue eyes and brown hair. He continued that she not only worked quite hard in her life time but was, in his estimation, “a strong made woman.”

The Schoonmaker family has deep connections to the early history of Ulster County and New York State History. They still call the Rondout Valley their home, having farmed it for over three centuries, and boasts twelve generations. On any day in the summer, except Monday when it’s closed, tourists and locals alike converge on the Schoonmaker farm stand on Route 209 in Accord named, of course, Saunderskill Farms. They walk away with plants, vegetables, pastries, coffee, and even a slice of history that members of the Schoonmaker family are all too happy to share.

One thought on “Saunderskill: One of the Oldest Farms in America”