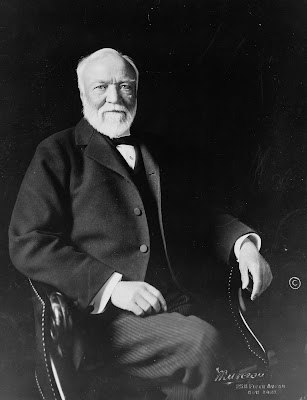 On Tuesday, April 10, the Museum of American Finance will open “Andrew Carnegie: Forging Philanthropy,” an exhibit on Carnegie’s life and work, with a spotlight on his love of Scotland, his business life and his philanthropic activities. The exhibit will be unveiled at an event presented in conjunction with the American-Scottish Foundation in celebration of Scotland-Tartan Week in New York City.

The exhibit will feature objects and documents from the Museum’s collection, as well as from the Andrew Carnegie Birthplace Museum and the Carnegie Corporation of New York Archives at Columbia University’s Rare Book and Manuscript Library. Highlights include George Soros’s Carnegie Medal for philanthropy, a $100,000 US Steel gold bond certificate issued to Carnegie for part of the sale of Carnegie Steel to JP Morgan, and the two-sided American/Scottish flag that flew at Carnegie’s Scotland estate, Skibo Castle, in the 19th century.

“Andrew Carnegie: Forging Philanthropy” will be on view through October 2012.