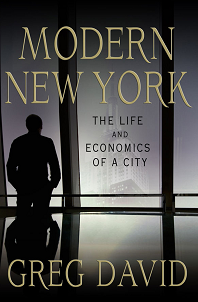 The economic history of New York is filled with high-stakes drama. In Modern New York: The Life and Economics of a City (2012, Palgrave Macmillan), journalist, economist and political commentator Greg David (who edited the regional Crain’s New York Business for more than 20 years and is now director of the business and economics reporting program at the Graduate School of Journalism at CUNY), tells the story of the city’s financial highs and lows since the 1960s.

David fairly conservative approach looks at how Wall Street came to dominate the economy in the years following a decade of economic decline. He argues that New York City’s great recession is not happening now, and it didn’t happen after 9-11. &#8220The Great Recession That Wasn’t&#8221, is David’s term for the current American economic disaster.

&#8220By comparison, the city’s great recession had occurred between 1969 and 1977, when a stock market crash devastated Wall Street and the city’s manufacturing sector collapsed and it’s competitiveness waned as the city hiked its tax burden,&#8221 David writes. &#8220Some 650,000 jobs disappeared over those years, and the population fell by almost 1 million people, two little-discussed factors that were as important as budget chicanery in created the Fiscal Crisis that almost sent the city into bankruptcy.&#8221

This understanding of New York’s post-war period rests in part on the neo-liberal interpretation of New York City’s recent history. It goes something like this: the anti-business policies (regulation, and higher taxes) of liberal machine politicians like John Lindsay (Mayor from 1966 to 1973) and Abe Beame (Mayor from 1974 to 1977) led to the loss of manufacturing and then the flight of New Yorkers from a desperate, crime-ridden and &#8220grimy&#8221 Gotham. Only the pro-development policies of Ed Koch and the great victory of Rudolph Giuliani, reformist street cleaner and crime fighter, kept New York City from becoming another Detroit.

That’s more or less the story told here in chapters like &#8220Structural Not Cyclical&#8221, and &#8220Making New York Safe For Commerce&#8221. David chastises leaders for failing to recognize long term manufacturing declines, and points to unions, burdensome taxes, and restrictive zoning as the major culprit. Perhaps due to the author’s limiting regional scope and focus on the perspective of the business community, significant American trends such as baby-boom suburbanization, container shipped goods from low wage workers in Asia and elsewhere, and media-based perceptions about crime and quality of life issues are set on the back burner.

For example, a wider perspective in Modern New York would include worker struggles to retain the wages and benefits that made living in the city attractive. New York City’s economic decline coincided directly with unprecedented attacks on the city’s workers. Witness, for example, the 1966 transit strike during which Lindsey refused to negotiate and mocked workers to the press. Or the seven-month teacher strike in 1968 that was the result of the firing of teachers opposed to Lindsey’s contract negotiation plan to divide their union. These strikes were followed by actions on Broadway, and the sanitation strike in the fall of 1968. In 1971 the city’s AFSCME workforce walked off the job. One might argue that workers simply had no interest in living in the city’s difficult employment environment. Whatever the cause of the city’s working class losses, Modern New York could have offered a deeper, more multidimensional understanding of the city’s recent economic history.

In David’s interpretation, after 9-11 the finance industry and tourism stepped in to help save the day, at least temporarily. In a chapter entitled &#8220Three Sectors To The Rescue&#8221, the author suggests that film and television production, higher education, and the technology sectors are the future of New York, leaving the contrary reader to wonder how the city can survive without its working class.