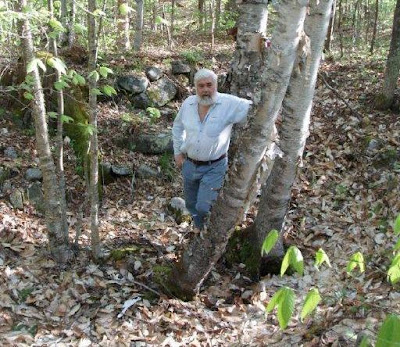 What follows is a guest essay by Glenn L. Pearsall who recently confirmed the birthplace of Civil War photographer Mathew Brady in Warren County, NY. The essay originally appeared in the Warren County Historical Society newsletter.

On November 10, 2011 the Town of Johnsburg Historical Society commemorated the birthplace of famed Civil War photographer Mathew Brady. They had a cast iron historic marker made and placed at the entrance of the C. Ernest Noxon Community Center in Wevertown, Warren County, NY. Brady was born in Johnsburg Township about 4 miles south of Wevertown in 1822 or 1823. A story of that dedication ceremony was featured in the Glens Falls Post Star and then picked up by the Associated Press. From there the story was distributed nationally and online versions of the story appeared across the country including the Wall Street Journal, New York Daily News and the New York Times.

The research into documenting Brady birthplace in Johnsburg began in 2006 and reads like a detective story or an episode of the PBS show “History Detectives”.

Mathew (only one “t”) Brady was an internationally known figure and much of what we know of the Civil War and famous leaders of the 19th Century comes from his photographs. Mathew Brady’s photographs of the dead at the battle of Antietam, featured in his New York City Gallery on October 1862, brought home to America for the first time the true horror of the Civil War. His corps of photographers documented that war with tens of thousands of photographs. His February 9, 1864 picture of Abraham Lincoln was featured on the U.S. $5 bill since 1928 and when that bill was re-designed in March of 2008 a new picture of Lincoln was used, taken by Brady that same day in 1864. Although most famous for his Civil War work, Brady’s Gallery of Illustrious Americans featured luminaries from Andrew Jackson to Andrew Carnegie. Brady’s work helped record and preserve American history, and yet, until just recently, the birthplace of this famous American remained a mystery.

Mathew Brady’s personal letters indicate that he was born north of Lake George, NY of “poor Irish immigrant parents”. Most Brady biographies are silent as to his exact place of birth. Others list his birthplace as Lake George, or just Warren County, New York. Local folklore here in the southeastern Adirondacks has said for years that he was born in Johnsburg, NY, but there was no documentation to substantiate that claim.

In 2006 I began research for my first book Echoes in These Mountains: Historic Sites and Stories Disappearing in Johnsburg, An Adirondack Community (Pyramid Press, 2008, recipient of a “Letter of Commendation” from the 35 county Upstate History Alliance in 2009). In writing that book I took on the challenge to try to actually document the place of Brady’s birth.

An inspection of the 1830 Federal Census of towns north of Lake George indicated that the only Andrew Brady listed was in the Census for the Town of Johnsburgh (then spelled with a “h”). That census lists Andrew Brady with 5 children- three boys and two girls. Two of those boys are listed in that 1830 census between the ages 5 to 10. Most sources list Mathew Brady as being born in 1822 or 1823 so he would have been 7 or 8 in 1830. The only reference to an exact date of birth is on www.NNDB.com which lists his date of birth as January 15, 1823, but there is no documentation listed for this and the exact date of January 15th may be confused with his date of death on January 15, 1896, 72 years later). 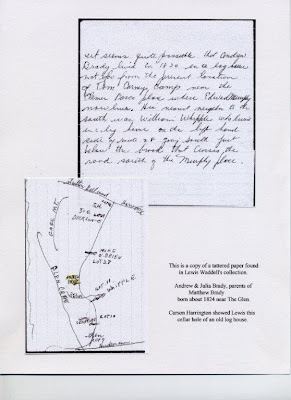 The next challenge was to determine exactly where he might have been born. In the early 1980s I had visited regularly with Lewis Waddell, then Town of Johnsburg Historian (now long since deceased). Lewis had told me about where the old foundation site was, but we never got around to visiting it together so I was not sure of its exact location. In the Johnsburg Historical Society files, however, I found a sketch that Lewis Waddell had made as to the location of the foundation. It was not to scale, however, so it took some exploring. Bushwhacking around the base of Gage Mountain my wife Carol and son Adam and I located the old road that went from the Glen to Wevertown (the road was later straightened and is now NYS RT 28). Referencing the other foundations along that old road that Waddell had sketched in, we located what I believe to be the foundation of the house where Mathew Brady was born in 1822 or 1823. 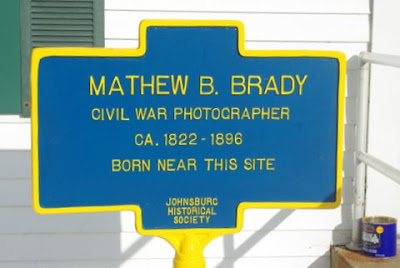 It has been written that Brady left the area at age 16 (in 1838 or 1839). Some sources indicate that his first stop was Saratoga Springs, N.Y. where he met famed portrait painter William Page. Brady became Page’s student and in 1839 the two of them travelled to Albany, N.Y. In 1844 they continued south to New York City where Brady’s instructions were supplemented under the tutelage of Samuel F. B. Morse (portrait painter and inventor of the single wire telegraph system). Morse was enthusiastic about the new art of capturing images through daguerreotype having met Louis Jacques Daguerre in Paris in 1839. Soon Brady was also excited about the new process and established his first photographic studio at the corner of Broadway and Fulton Street. In 1849 he established a studio in Washington D.C. so that he could photograph the famous men of his time there.

In 1896, depressed by the death of his wife Juliet (“Julia” Handy) 9 years earlier and suffering from alcoholism and loneliness, Mathew Brady died in the charity ward of the Presbyterian Hospital in New York City. Penniless at the time of his death, his funeral was paid for by veterans of the famous 7th New York Volunteer Infantry. He is buried in Congressional Cemetery in Washington, D.C.

Photos: Above, Glenn Pearsall at the re-discovered Mathew Brady foundation in Johnsburg- middle, a hand drawn map by former Town of Johnsburg Historian Lewis Waddell showing the possible location of the Brady homestead (not to scale)- below, the newly installed historic marker in nearby Wevertown, NY. (Photos courtesy Glenn Pearsall).