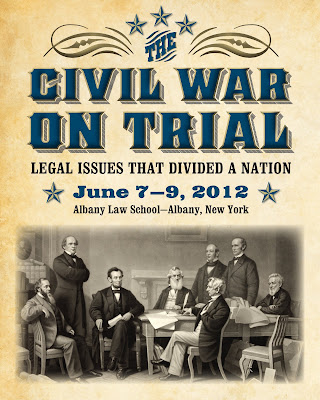 A conference entitled &#8220Civil War on Trial-Legal Issues That Divided A Nation&#8221 will feature a three-day program over June 7-9, 2012, include some of the foremost Civil War and Constitutional scholars in the nation on the subjects of the Civil War and the law, and will look at this iconic period in American history in a way unique from virtually all other conferences nationwide. The conference is being chaired by nationally prominent Civil War scholars Paul Finkelman and Harold Holzer.

The conference will be held on the campus of Albany Law School in Albany, New York from June 7-9, 2012. For more information on the conference agenda and registration, go to www.nysarchivestrust.org or call (518) 473-7091.

The New York State Archives Partnership Trust and the Government Law Center at Albany Law School, in cooperation with the Historical Society of the Courts of the State of New York, the New York State Bar Association, and the Abraham Lincoln Bicentennial Foundation are organizing the conference. Principal financial support has been provided by History Channel and the Abraham Lincoln Bicentennial Foundation.