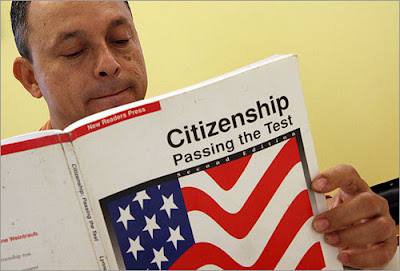 The New York State Council for the Social Studies annual conference which I attended was held March 22-24 in Saratoga Springs. Several of the sessions were related to the new common core curriculum in social studies. The primary presenter was Larry Paska of the New York State Education. Also speaking was Regent James Dawson. In addition to the formal presentations both answered questions, Paska in a scheduled second session and Regent Dawson in an impromptu setting for close to an hour after his talk. In both sessions, teachers raised the issue of citizenship not being a goal for the proposed new curriculum. They are to prepare students for college and work but not to be adult human beings in a democratic society.

The issue of citizenship and one’s identity as an American is part of a larger political discourse in the country. New York State is expertly positioned to play a leading role in the discussion and for the development of appropriate standards and curriculum in the proposed common core curriculum. Of course, it could also squander the opportunity of crisis.

Consider for example, 9/11. That event is not part of the standards in New York because they were developed in the 1990s prior to its occurrence. After the event, several proposals were made for a statue to honor the firefighters using the incident of the raising of the flag paralleling Iwo Jima. (By the way, at the time, politicians routinely said &#8220firefighters&#8221 while the real people said &#8220Thank god for the firemen who rescued me.&#8221). Some proposals show the actual firemen involved who as it happens were white. One proposal had a male Hispanic, African, and European-American. This depiction goes right to the heart of identity politics in America today: the victims were of all backgrounds but the individual human beings at the flagpole were not.

A recent article in Newsweek reminded me that the issue was alive and well. Angelo Falcon, the president of the National Institute for Latino Policy in response to comments made by Republican presidential candidates said: &#8220They forget that Judge Sotomayor is an icon for the Latino community. It’s like attacking Martin Luther King or George Washington for blacks and whites.&#8221 So Sotomayor and King can’t be heroes to whites and the Father of our country can’t be a hero to Latinos and blacks. Welcome to the world of identity politics where the hyphen and not citizenship defines you. This has serious consequences for our country.

For example, at the social studies conference, a teacher performed part of his two-teacher play on Andre and Arnold. The middle school and high school teacher performed that play as part of a teacherhostel last summer at the Foundry Museum in Cold Spring. The teacher at the conference told me that the play was very popular at a &#8220minority&#8221 school, &#8220minority&#8221 being a code word for &#8220majority&#8221 black. The play was popular because the students identified with Arnold who &#8220stuck it to the man,&#8221 the &#8220man&#8221 in this case being the indispensable person for the creation of America. Please remember during the summer Olympics only to cheer for the athletes who are of the same race and ethnicity you are!

Here is precisely where New York State can and must take the national lead in the formulation of the new social studies core curriculum. New York exemplifies that true melting pot ideal where the country you choose to be a citizen of trumps your hyphenated identity. This concept has always been part of New York’s culture even before it became a state. William Johnson of the Mohawk Valley was the first to gain fame as one who was at home in a multitude of cultures. The Iroquois knew that all Europeans were not one people and that the Dutch were not the British were not the French were not the Germans. Indeed they defined the Palatines as being not the others. (&#8220When the Germans Were Hispanic&#8221 will the subject of a talk I will be giving at the Chappaqua Library in the fall and in an article to appear in American Interest.) Similarly, the European peoples knew that the Mohawk were not the Oneida were not the Seneca.

That sense of awareness of the differences among peoples of the same race continued as we saw during the Mohawk Valley Teacherhostel last summer. We visited not only the William Johnson homes but also his son-in-law at Guy Park Manor, now the Elwood Museum which shortly after was damaged by Hurricane Irene. What struck me the most from the exhibits was the number of different immigrant groups recently arrived Europe via Ellis Island who now worked in the Amsterdam factories. It was like an upstate version of the Lower East Side. I venture to say that the descendants of these people celebrate Thanksgiving even though none are of Puritan heritage and July 4th even though none are DAR or SAR. These two quintessential American holidays, meaning they can’t be switched to Monday, are exemplified by immigrant New York: the Macy*s Thanksgiving Day parade and the Macy*s Fourth of July fireworks. Where else could Lady Liberty be except in New York and by Ellis Island?

Perhaps hip-hop artist and Tony-award-winning artist Lin-Manuel Miranda of Manhattan provides a more hopeful future than Angelo Falcon. Miranda asked: &#8220Why hasn’t anyone done a hip-hop version of Alexander Hamilton’s life?&#8221 What sparked Miranda’s interest in Hamilton, a Caribbean immigrant to New York who established the economic foundation for this country and not Jefferson? A paper he wrote in high school about the duel with Burr. Later as an adult he read Ron Chernow’s biography of Hamilton while he was on vacation in Mexico. (What do you read when you travel?) Miranda then answered his own question by creating &#8220The Hamilton Mixtape,&#8221 a hip-hop song cycle based on Hamilton’s life, excerpts of which were played at Lincoln Center. That’s America. That’s why education is so important. That is why the new social studies curriculum is so important for our future.