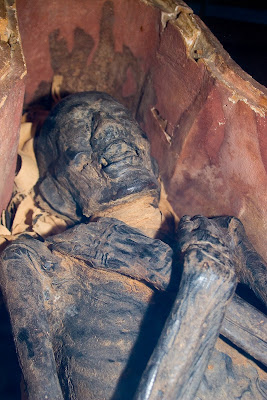 In preparation for the 2013 exhibition The Mystery of the Albany Mummies, the Albany Institute of History & Art’s two mummies, each thousands of years old, will be brought to Albany Medical Center for CT scans and x-rays, using modern imaging techniques to learn the mummies’ genders, causes of death, and more. Leading experts in body imaging and Egyptology will direct the procedures and analyze results.

The Albany Institute of History & Art’s two mummies were acquired from Cairo, Egypt in 1909, were brought to the Albany Institute from Cairo in 1909 by Samuel W. Brown, a member of the museum’s Board of Trustees. The mummies and their coffins have been seen by generations of visitors.

Arthur Pielli, Radiology Manager at Albany Medical Center, and two radiologists, Phuong Nguyen Vinh, MD, and Michael Edward Schuster, MD will examine the mummies. The results will then be analyzed with the help of Egyptologist and medical doctor Dr. Robert Brier, a Senior Research Fellow at Long Island University known as “Mr. Mummy,” and Dr. Peter Lacovara, the exhibition’s guest curator and Senior Curator of Egypt, Nubia and Near East at the Carlos Museum at Emory University.

The mummies were last examined by x-rays and CT scans on November 12, 1988. This preliminary analysis helped to determine the mummies’ sex, approximate ages, and various insights into the mummification process. The x-rays and CT scans show a number of bundles inside both of the mummies. Based on the last scan, it was determined that the partially unwrapped mummy is Ankhefenmut, a priest in the temple of Mut at Karnak in Thebes during Dynasty XXI (c.1085-945 BC).

Ankhefenmut is reported to have died in 966 and was probably between 55 and 65 years old at the time of his death. The wrapped mummy is a woman. Her name is not known because the top of the coffin was badly deteriorated and left in Cairo by Samuel Brown in 1909. According to Brown she also came from the cache at Deir el-Bahri. X-rays reveal that she was probably between 35-45 years old when she died.

During Dynasty XXI, a change in the practice of mummification occurred. The internal organs were no longer placed in canopic jars, but were usually wrapped in linen packages. These packages were then placed in the empty body or placed between the legs. Canopic jars, however, continued to be a part of the funerary equipment, but were made smaller.

Perhaps the most interesting discovery was a well-crafted fake toe, possibly made of ceramic, carefully attached to the right foot of the wrapped mummy. It is presumed that the toe was fashioned for the woman during the mummification process because of the belief that one had to be physically intact to enter the afterlife. This discovery was highlighted on The Learning Channel’s program, The Ancient ER, in February 2003.

Photo: Partially unwrapped mummy of Ankhefenmut, a priest in the temple of Mut at Karnak in Thebes during Dynasty XXI (c.1085-945 BC). Courtesy Albany Institute of History and Art.