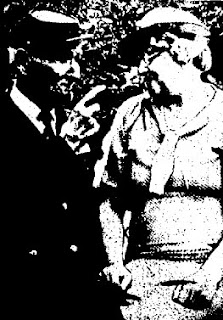 In 1936, at a birthday party in the Adirondacks, the honoree claimed he would be married within two years. He passed away six years later, but during that span, he received more than 100 letters and 9 personal visits from female suitors- became engaged- was dumped the day before the wedding- was the guest of honor at several dinners, birthday parties, and parades- regularly mowed his lawn with a scythe- joined a ski club- and received the Purple Heart for war injuries.

Nothing particularly unusual?unless, of course, at that party in 1936, the birthday boy was turning 99 years old. Review those events from that perspective, and now you’ve got something.

Meet Charles Jennette, for a time the most famous man in the Adirondacks. His greatest fame came in his 100th year, when he became engaged to Ella Blanch Manning, a New York City woman who had attended his 99th birthday party several weeks earlier. Days before the wedding, an Albany headline read “100 Called Too Old to Marry- Man Will Take 3d Wife at 99.”

But after a visit with her daughters, and just 24 hours before the wedding, Ella changed her mind. Already a media sensation (and despite being left high and dry), Charles continued with his post-wedding plans of a boat ride and dinner, remaining hopeful of marriage in the near future. After many interviews, he was only too happy to return to an otherwise quiet, humble life.

Jennette was born in Maine in 1837. The family moved to Canada when he was five, and returned to the US when the Civil War began. At Malone, Charles enlisted for three years with Company A, 95th NY Volunteers, but served only nine months. His time was cut short in 1865 when he was wounded in the Battle of Hatcher’s Run (also known as Dabney’s Mills) in Virginia. He was still in the hospital when the war ended.

In 1866, he married Emily Proulx in Ottawa, a union that would endure for 57 years. When the Spanish-American War broke out in 1898, Charles tried to enlist at the age of 61, but was refused. He lived much of his life in the St. Regis Falls area as a lumberman, toiling in partnership for many years with his son, John.

They ended the business relationship in December 1915 when Charles was 78. In the following year, he built a cottage at Old Forge. In 1921, the 84-year-old was one of only six attendees at the final meeting of the Durkee Post GAR in St. Regis Falls. GAR represents Grand Army of the Republic, the title given to Union forces in the Civil War. Because few veterans remained, the local group was discontinued.

His wife (Emily) died in the mid-1920s. Charles began spending summers in Old Forge and winters in Ilion (near Herkimer). He also made regular visits to family in Tupper Lake. In 1935, he married for a second time (in Montreal), but his new bride died just two months later. 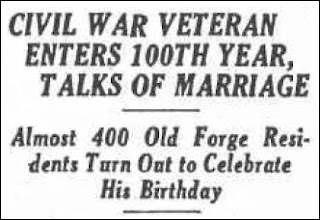 He was generally known as a remarkable old-timer, but fame arrived in 1936 when, at his 98th birthday party, Charles announced he expected to wed again before he reached 100 (because, he said, “over 100 is too old”). Several hundred people attended the festivities.

After addressing more than a hundred female suitors (ages 42 to 72), he made plans to marry Ella Manning. Instead, at 99, he became America’s most famous groom to be jilted at the altar.

After that, it seemed anything he did was remarkable, and at such an advanced age, it certainly was. In 1937 (age 100) he rode in a Memorial Day parade as guest of honor. Shortly after his 101st birthday, he attended the Gettysburg Annual GAR Convention, 72 years after his combat days had ended.

In 1940, on his 103rd birthday, he used a scythe to mow the lawn, and otherwise continued his daily ritual—trekking nearly two miles to retrieve the mail, and taking time to read the newspapers (and he didn’t need glasses!). He made maple syrup every spring and tended a garden each summer.

In August 1940, at Oneida Square in Utica, Charles was honored in a ceremony at the Soldiers’ Monument, which was built in 1891 to memorialize the Utica men who “risked their lives to save the Union.” Seventy-five years after suffering wounds in battle, Charles Jennette became a member of the Military Order of the Purple Heart (which had been formed during WW I).

At age 104, perhaps still holding a marriage possibility in the back of his mind, Charles became the first male allowed to join the Old Forge Sno-Flakes, an all-girls’ ski club. He soon expressed regret at not having taken up skiing “when I was young, say 70 or so.”

In mid-1942, in support of the WW II effort, a photo of Charles purchasing war bonds was widely distributed among newspapers. He continued to attend American Legion rallies and make other appearances. Finally, in December of that year, he passed away at the age of 105.

Photos: At age 99, Charles Jennette with his fiance, Ella Manning- one of many headlines generated by Jennette’s story.

3 thoughts on “Charles Jennette: Called Too Old to Marry”