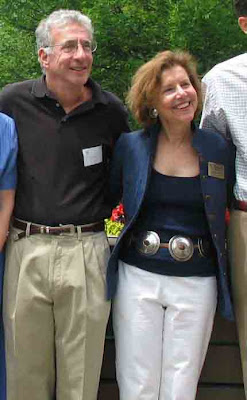 The Board of Trustees of the Adirondack Museum has announced the selection of John and Margot Ernst as the recipients of the 2012 Harold K. Hochschild Award. The Adirondack Museum will formally present the Ernsts with the award at the annual Gala Benefit on July 28, 2012.

John and Margot Ernst split their time between New York City and Elk Lake Lodge, a family owned resort near North Hudson, N.Y., located in the 12,000 acre Elk Lake-Clear Pond private preserve, which National Geographic called &#8220the jewel of the Adirondacks.&#8221 John and Margot are involved in public service through their work with non-profit organizations in New York State and the North Country.

In addition, John and Margot have been active for some time in the future of the Adirondacks. In the early 1960s John’s grandfather donated the first conservation easement in New York State on the land surrounding their property on Elk Lake, preserving public access on trails to the Dixes and Panther Gorge and on to Mount Marcy.

The Open Space Institute awarded its 2009 Land Conservation Award to John and Margot Ernst for their &#8220outstanding contributions in the fields of land conservation and environmental protection. &#8221 John Ernst received a 2011 Advocate Award from Environmental Advocates of New York.