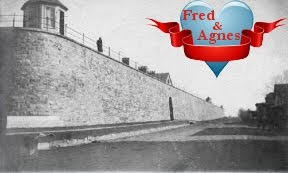 Ah, Valentine’s Day. Love is in the air. Chocolates, flowers, and special cards are a must. Maybe a family meal, or perhaps a romantic dinner for two. Jewelry? Diamonds? The sky’s the limit when it comes to making your sweetheart happy and showing true dedication. But it’s all pretty amateurish compared to real commitment. Which brings us to Fred Roderick and Agnes Austin. Their love is one for the history books.

Here’s the story as described in 1883 in a couple of newspapers. Without hard facts, I can’t account for all the details, but you have to admire the sense of purpose, focus, and ingenuity this couple used to achieve togetherness.

At Sageville (now Lake Pleasant, a few miles southeast of Speculator), Fred Roderick, about 25 years old, had been jailed for stealing a pair of horses, which had since been returned. In those days, a convicted horse thief could expect to do time in prison. Next to murder, it was one of the most serious crimes—horses were a key component to survival in the North Country.

In rural Hamilton County, it was no simple task to organize a trial, so for several months the county jail served as Roderick’s home. It was lonely at times, but he wasn’t entirely without company. Every Sunday, the local Methodist pastor brought a dozen or so members of his congregation to the jail, where they sang songs and held a prayer meeting.

For a couple of years, young Agnes Austin was among the church goers who participated. Shortly after Roderick’s incarceration, parish members noticed that, instead of lending her voice to the choir at all times, she seemed to have taken a personal interest in Fred’s salvation.

Soon Agnes gained special permission from the sheriff for weekday visits which, she assured him, would lead Roderick down the straight and narrow. But it seemed to work in the reverse. Agnes began showing up at the jail less often on Sundays and more frequently during the week. Imagine the whispers among her church brethren. Their pretty little friend was consorting with a criminal!

Or maybe her missionary efforts were sincere after all. Fred Roderick finally came forward and accepted religious salvation, owing it all, he said, to young Agnes. People being as they are, tongues wagged more frantically than ever about the supposed scandalous goings-on. Mr. Austin forbade (what was he thinking?) Agnes from making any more jail visits. Taking it one step further, he spoke to the sheriff, hoping to kill a tryst in the making.

It wasn’t long after that Agnes disappeared. With her supposed lover lingering hopelessly in jail, why would she run away? Well, as it turns out, she didn’t. Agnes and Fred had made plans. She was told to hide out at his father’s camp, where he would join her after his escape. (Country jails were often loosely kept, and escapes were common.)

After waiting more than a week for her sweetheart, Agnes took matters into her own hands, which led to a sight that shocked the residents of Sageville. A constable rode into town, and behind him trailed Aggie Austin. The charge? Horse theft. In broad daylight, she had taken not just any horse, but one of the very same horses Fred had stolen!

Because she was female, and because she made no effort to run when pursued, bail was set at $600—which Agnes immediately refused. To the puzzled bondsman and the sheriff, she explained: if Fred couldn’t be with her, then she would be with Fred. To that end, she had left the camp, stolen a horse, made sure she was caught, and now refused to be bailed out of jail.

It gets better. The next morning, Fred informed the sheriff that he wished to marry Miss Austin, and Agnes confirmed the same. Papa Austin most certainly would have objected, but Agnes was 19, of legal age to make her own choice. And that choice was Fred.

The judge was summoned, and the sheriff and his deputies stood witness to the joining. The district attorney weighed in as well, contributing what he could to the couple’s happiness.

Though separate trials were required, he promised to “bring both cases before the same term of court, and thus allow the pair to make their bridal journey together to their future mountain home at Clinton Prison.”