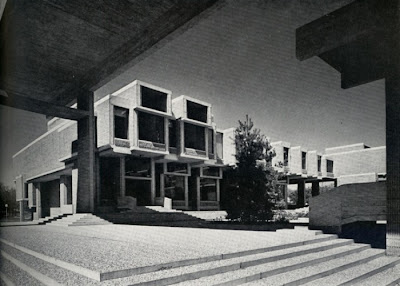 It may be true that our past is behind us, but some of it remains nearer than the rest. Distance provides a remove from which to appraise the value of a person, thing,or event. The lack of such distance can limit our perspective on the nearer parts, and in some instances, might destroy our heritage before we have a chance to adequately consider it.

Consider two examples of Capitol architecture. The 1899 New York State Capitol is heralded as a triumph. The virtual tour proudly states that the building took 32 years and $25 million to construct. It highlights the “grand spaces” and extravagant details throughout the building such as its carved staircases, its paneled chambers, and the exotic materials used inside and out. I have visited it myself and would recommend the tour to anyone with an interest in architecture or government.

But I would also recommend another nearby capitol, the Orange County Government Center. Equally grand, drafty, challenging, and detailed, it was designed by Paul Rudolph and opened in 1970. It is the last remaining work by an internationally renowned modern architect in the county, but when the Government Center appears in the news, it is most often being condemned as outdated, costly, and impractical,an architecturally inappropriate eyesore. Rather than imported granite and marble, it was constructed of cast concrete. Where the State Capitol is celebrated for a 56 foot high Assembly Chamber, The Government Center is faulted for the wasted space around open staircases and the thermal loss of its clerestories and large windows.

Paul Rudolph was unique among modernists in successfully winning a number of public contracts, but the fate of his creations is typical. The ideological, aesthetic, and engineering chutzpah of these architects who advanced the art through the Twentieth Century is now derided as kitsch, impractical, or failed. And our historic preservation laws do not provide umbrage for such youngsters: not yet 50 years old, their buildings must fend for themselves against nature and man.

If a building falls down due to poor design in less than 50 years, so be it. But the backlash against modern architecture is often about creating a new legacy by removing a previous one. At Gettysburg National Military Park, the National Park Service tried to destroy celebrated modernist Richard Neutra’s 1961 Cyclorama. They replaced it with a new visitor center, built to look old, on previously undisturbed ground, claiming it to be more appropriate to the site.

Fortunately, while many fail to appreciate plywood, plate-glass, and concrete with the same fervor that they exude for timber, stained glass, and marble, there are a few organizations addressing the importance of our latest inheritance. Learn more about the Recent Past Preservation Network and their efforts to preserve the Cyclorama online

The mission of DOCOMOMO New York/Tri-State is to“increase public awareness and appreciation of Modern movement architecture,landscape and urban design- to identify and document local examples- and to advocate for the protection of those determined most significant.”

The social, political, and engineering context that these buildings represent is a significant part of our national identity. While the nature of the movement and its pioneering use of engineered materials may condemn some of its experiments to rubble, there are enduring examples as well. Take a moment to consider what you haven’t yet,maybe your children’s children will thank you one day!

3 thoughts on “Chris Pryslopski: Preserving the Recent Past”