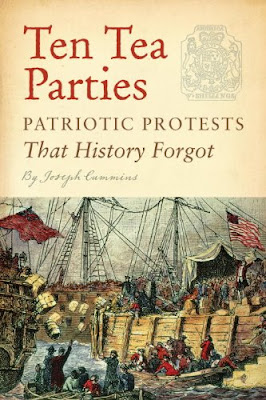 Everyone knows about the Boston Tea Party, where angry colonists hurled 92,000 pounds of tea into Boston Harbor, but few realize it was part of a larger movement that swept across the colonies through the late 1700s. New York, New Jersey, Pennsylvania, Maine, North Carolina all had their own versions of the now celebrated theft and destruction of private property protest. A new book by historian Joseph Cummins, Ten Tea Parties: Patriotic Protests that History Forgot, (Quirk Books, 2012) highlights some of those protests, and includes an appendix with eight more.

Cummins includes the story of Philadelphian Samuel Ayres, who was nearly tarred and feathered by a mob of 8,000 patriots, and that of Annapolis, MD, where 2,320 pounds of tea was burned to ashes. He also includes a short history of the East India Company, which was the world’s most powerful trading company for 250 years and relates how the men who participated in the Boston Tea Party kept their identities hidden for over 40 years fearing civil suit from the East India Company.