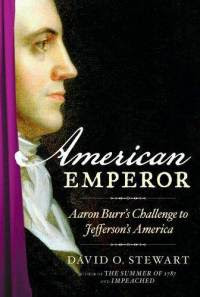 The name Aaron Burr instantly calls to mind one event: his duel with Alexander Hamilton, in which the latter, one of the darlings of American politics, was slain. But there was so much more to Burr, one of the most fascinating characters in American history, now revealed in American Emperor: Aaron Burr’s Challenge to Jefferson’s America (Simon & Schuster, 2011) by DC-based historian David O. Stewart.

At one time or another, Burr was considered a man of great integrity, a shoo-in for the presidency, a murderer, and a traitor. Yet the most outrageous story about Burr is known to few and understood by fewer still. As he neared the end of his vice-presidential term in 1804, he began an extraordinary scheme to create his own personal empire in North America.

For generations, historians and writers have scratched their heads over what Aaron Burr was up to when he traveled west in 1805, leaving the vice presidency while under indictment in two states for the murder of Hamilton. Did Burr mean to foment secession of America’s West? Insurrection in New Orleans? An invasion of Mexico and Spanish Florida? Or simply to lead a settlement of Louisiana lands? In American Emperor, Stewart tells this astonishing part of Burr’s story, tracing his descent from made man to political pariah to imperialist adventurer.

The same passion for history that led the New York Times to print a glowing review of Stewart’s first book, The Summer of 1787, about the writing of the Constitution, can be found in his new account that combines history with an arresting adventure story.