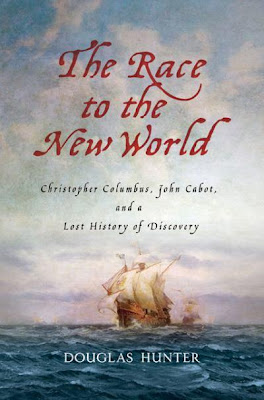 Doug Hunter’s just released The Race to the New World: Christopher Columbus, John Cabot, and the Lost History of Discovery (Palgrave Macmillan, 2011), offers a new angle to the ubiquitous story of Columbus’ voyage- how John Cabot became his true rival in this search for the West Indies.

The final decade of the fifteenth century the Genoese mariner Christopher Columbus sailed westward on the Atlantic Ocean, famously determined to discover for Spain a shorter and more direct route to the riches of the Indies. Meanwhile, a fellow Italian explorer for hire, John Cabot, set off on his own journey, under England’s flag.

In Race to the New World Hunter tells the fascinating tale of how, during his expedition, Columbus gained a rival. In the space of a few critical years, these two men engaged in a high-stakes race that threatened the precarious diplomatic balance of Europe-to exploit what they believed was a shortcut to staggering wealth. Instead, they found a New World that neither was looking for.

Hunter provides a revealing look at how the lives of Columbus and Cabot were interconnected, and how neither explorer should be understood without understanding both. Together, Cabot and Columbus provide a novel and important perspective on the first years of European experience of the New World.