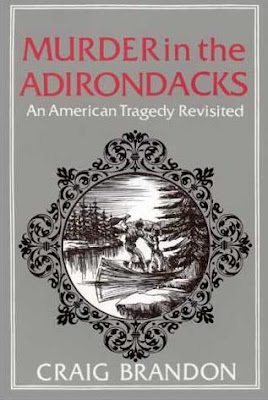 The first program of the Adirondack Museum’s 2012 Cabin Fever Sunday series, &#8220Chester Gillette: The Adirondacks’ Most Famous Murder Case&#8221 will be held on Sunday, January 15, 2012.

It’s the stuff movies are made of- a secret relationship, a pregnancy and a murder. Over a century after it happened in Big Moose Lake, Herkimer County, the Chester Gillette murder case of 1906 is the murder that will never die. The murder of Grace Brown and the case following was the subject of Theodore Dreiser’s 1925 book An American Tragedy, and the Hollywood movie A Place in the Sun.

The story continues to be told today with a 1999 Opera at the Metropolitan Opera in New York and in a 2011 documentary North Woods Elegy. Author Craig Brandon, considered among the world’s foremost experts on the case, and author of Murder in the Adirondacks, will present and lead a discussion.

Craig Brandon is a national award-winning author of six books of popular history and public affairs and a former award-winning reporter.

Held in the Auditorium, the program will begin at 1:30 p.m. Cabin Fever Sundays are offered at no charge to museum members or children of elementary school age and younger. The fee for non-members is $5.00. The Museum Store and Visitor Center will be open from noon to 4 p.m. For additional information, please call (518) 352-7311, ext. 128 or visit
www.adirondackmuseum.org.