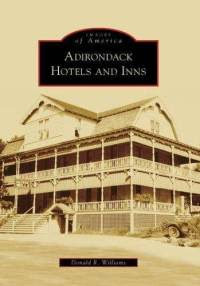 The Adirondack region evolved over years from vast, impassable wilderness to a land of logging camps, tanneries, sawmills, and small settlements. By the end of the 19th century, the area grew again, becoming a tourist destination famed for its great hotels, quaint inns, cottages, and rustic cabins.

The hotels and inns spread throughout the Adirondacks, beginning after the Civil War and continuing during the Gilded Age between World Wars I and II. The region drew the rich and famous, as well as workers and families escaping the polluted cities. This volume contains 200 vintage images of those famed accommodations that catered to years of Adirondack visitors.